SciFi Diner Podcast Ep. 67 – What Do You Get When You Cross Dayton Ward, Kevin Dilmore, and Bacon Flavored Gum?

If you have listened to the show for sometime, we would love to have you leave feedback on iTunes. We know not all of you use iTunes, but for those that do, it helps us become more visible. If you don’t use iTunes, your feedback is still valuable. Visit our webpage at https://scifidinerpodcast.com and leave a comment on the show notes or email us at scifidinerpodcast@gmail.com We want to know what you are thinking about what we are saying and what shows you are watching!

Tonight we will be interviewing Dayton Ward and Kevin Dilmore and chatting a bit more about Shore Leave 32.  We reveal the winner of our Star Wars Trivia contest. We have some listener feedback, some news on Dr. Who and Johnny Depp, Stargate Universe goes dark. Miles brings you This Week in Star Trek with Summer Glau and Star Trek 12 News and Wayne and Dan from the Fringecasting with Wayne and Dan Podcast give you their top five Worst Ways to Die in Season Two of Fringe in the SciFi Five in Five.

The Question: Which of Vader’s hand’s did Luke sever with his lightsaber?

The Prize: Four Smart Pop Books: In The Hunt (Essays on Supernatural with Forward by Keith R. A. DeCandido), Finding Serenity (Edited by Jane Espenson who wrote Shindig and was a Buffy the Vampire Slayer Writer), The Man From Krypton, and Thoughts about Anita Blake’s, Vampire Hunter Series.

You will have two weeks to answer this question. Send your answer with your mailing address to scifidinerpodcast@gmail.com, call us at 18885084343, or DM us on Twitter at @scifidiner.

Fringecasting with Wayne and Dan

Universe to get ‘darker’; SGA actors to guest

Stargate: Universe show-runner Brad Wright has revealed that the dark atmosphere of the show’s first season was only the beginning: the show is set to get darker next year.

“When you try to adopt a more realistic tone, where frankly we don’t win every time, then there have to be real-world repercussions like death and injury and loss,” Wright said. “You can dig deeper into characters and the deeper you dig the repercussions can get bigger. We are going to some places with these characters, and already have really, that we would never go with the heroes of our other series.”

And things don’t bode will for Everett Young, played by Louis Ferreira.

According to Robert C. Cooper, “After everything he’s been through – and it gets worse for him initially at the beginning of Season 2 – it’s impossible to imagine that a person wouldn’t go to a very dark place at least for a short period of time.

In other news, according to GateWorld, we’re set to see some Stargate Atlantis actors guesting on Universe next year. No word on who, or to what extent yet, however.
Movie News:

Johnny Depp rumored to star in Doctor Who big-budget film

And yet that’s what we might be seeing on the big screen a few years from now if the info uncovered by tor.com is correct.

An article at pubarticles presented the project as fact and reportedly passed on the following news:

Long-time producer of the television series Russell T. Davies reported that the reason he moved on from the show was due to the opportunity to transform the Doctor to the big screen. “Bringing the Who franchise to the theaters is a regeneration for the character beyond the usual one. A theatrical release has a greater range and can reach millions of more people than just the fans. There will be brand new concepts and the film will be just as adventurous, scary and humorous as the television programme. But none of us working the film will forget what makes the character great and interesting and the long-time fans will not be disappointed because yes, the Daleks make an appearance.”

We’d love to provide you with a link to the original article so you can check it out for yourself, but we can’t, because it has since been taken down. Which by itself would lead us to believe that this is nothing more than one big, fat rumor.

But the trustworthy tor.com did some digging on its own, reaching out to studio sources who said that “the casting of Johnny Depp as the Doctor for a 2012 film is confirmed.”

Even though we’re not sure what to make of it all, we thought you’d want to know about it. But whether or not it’s true, would you be ready for a Johnny Depp Doctor Who?

TWIST : This Week In Star Trek

We loved Summer Glau in such sci-fi series as Angel, Firefly and The Sarah Connor Chronicles. But what sci-fi does Glau herself love?

She recently revealed that her favorite all-time sc-fi series—the one she’d show off to a new friend to let them see how awesome sci-fi really is—is Star Trek: The Next Generation.

“The show I really grew up on was Star Trek: The Next Generation,” she said. “That was a show that I watched with my parents, that I talked them into letting me stay up to watch it. I got to meet Marina Sirtis last year, which was a really special moment for me. I grew up idolizing her.”

As for which sci-fi icon she’d most like to meet, now that she’s come face to face with Sirtis, Glau remains focused on Trek.

“If I had to say one person,” she said, “I guess it would be William Shatner. “

EXCLUSIVE: Producer Bryan Burk Talks Schedule and ‘Bigger’ Scope Of Star Trek Sequel On Trek Movie.com
Bryan Burk is a long-time collaborator with JJ Abrams and his producing partner for pretty much everything going down at Abrams’ Bad Robot production company. Although we don’t often hear from him, Burk is the fifth member of Trek’s new Supreme Court along with JJ Abrams, Damon Lindelof, Roberto Orci and Alex Kurtzman. TrekMovie recently spoke with the producer about his plans and hopes for the Star Trek sequel.

TrekMovie: You have to deliver a movie to Paramount by June 2012, so when do you expect to start shooting?

Bryan Burk: We will be shooting this time next year. Starting early summer or late spring.

TrekMovie: So that puts pre-production starting around December this year or January 2011?

Bryan Burk: I would like to shoot for that, we will see.

1.  Ep. 3 Fracture: A cop in a train station crystalizes and his body explodes. 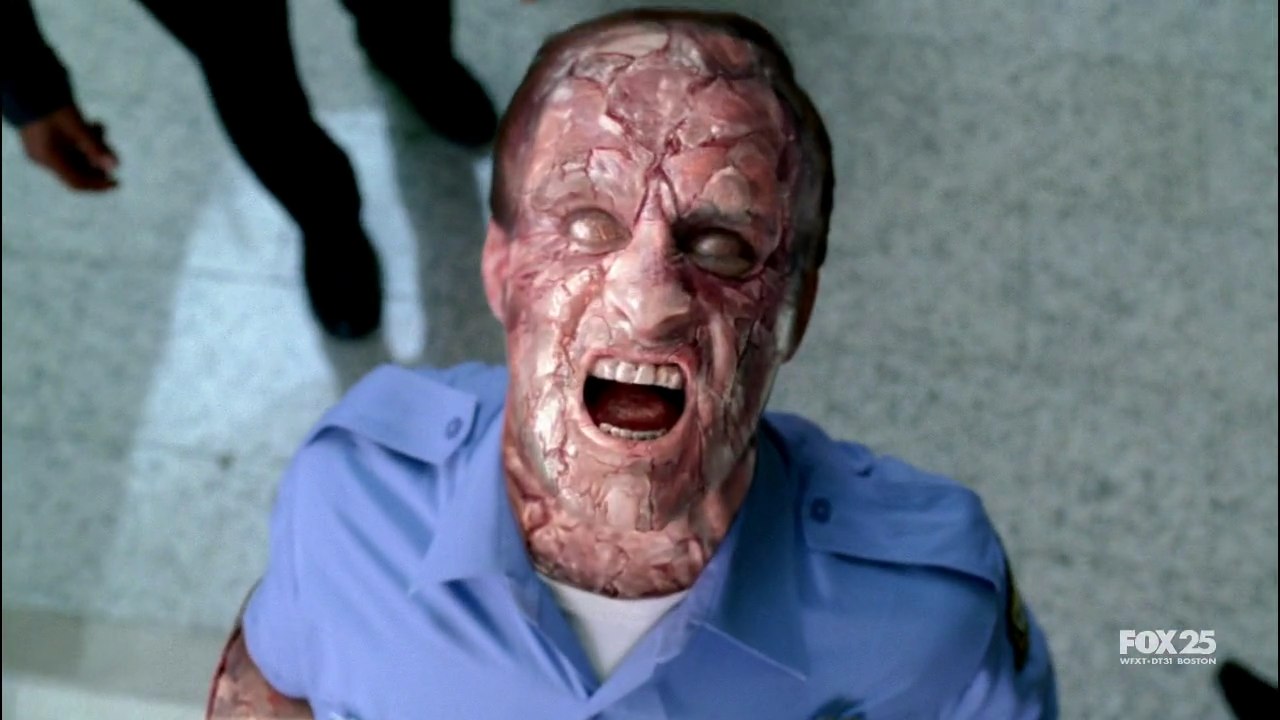 2.  Ep. 9  Snakehead: A man feels sick, a squid-like parasite crawls out of his mouth.

4.  Ep. 15 – Jacksonville: A Man collides and fuses with his alternate self.

5.  Ep. 17 – Olivia; In The Lab; With The Revolver : Woman in a car develops instant cancerous lumps.