Our Interview With Connor Jessup From Falling Skies;

The Music at the end of this week’s show is from Nathan Fillion’s show Castle.

New Trivia Question:
Can you name a show & the name of the episode that had Saul Rubinek (Warehouse 13), Robert Picardo (ST Voyager,  SGA) and Adam Baldwin (Firefly, Chuck) guest starred in at the same time.
Prize:
Signed Print of Cliff Simon who played Baal.
Be sure to include the Code Word found in the first 15 minutes of the show.

Life After Trek Podcast
Geek Out With Mainframe Podcast

Do you avoid spoilers like Xander Harris avoided commitment? Do you think people who spoil movies and TV shows should be forced to compete in the Hunger Games? Well, you might want to rethink those thoughts: It turns out that spoilers don’t actually ruin your enjoyment of entertainment.

In fact, according to researchers, knowing what’s happening next may increase your satisfaction with the experience.

A press release from the University of California, San Diego, reads:

Subjects significantly preferred the spoiled versions of ironic-twist stories, where, for example, it was revealed before reading that a condemned man’s daring escape is all a fantasy before the noose snaps tight around his neck.

Researchers offer suggestions as to why their subjects enjoy spoiled versions of stories more than unspoiled: One suggested that plot isn’t as important as storytelling, while another said that knowing what will happen in a story makes it easier to read.

The press release noted, “The overall findings are consistent with the experience most of us have had: A favorite tale can be re-read multiple times with undiminished pleasure. A beloved movie can be watched again and again.”

Of course, some of us will still prefer to remain spoiler-free. But in the light of this news, we won’t take it as badly when a clueless friend spills all.

Also in light of this news, we feel it’s okay to spoil the above story in the block quote, the one where the condemned man fails to escape the noose: It was Ambrose Bierce’s “An Occurrence at Owl Creek Bridge,” and a short film of the story was aired as the very last episode of The Twilight Zone.

Sci-fi goddess Summer Glau is headed for Alphas tonight on Syfy and, of course, she has superpowers, along with an unusual new hairstyle. It looks like Glau racks up another standout sci-fi role as a powerful Alpha named Skylar who can build amazing inventions.

Glau, who’s made a habit of playing kick-ass, often unstable sci-fi babes, has put together an impressive body of work so far. So, we decided to rank our nine favorite and least-favorite Summer Glau roles. Where Alphas Skylar will stand once the dust clears, we’ll leave that for you to decide.

Here’s our list from the best to the not-so-memorable:

It was only the second television role of her career, but Glau embraced her inner crazy and made River Tam one of the most interesting and mysterious characters on television. River, along with her brother, Simon, was on the run from the Alliance, who’d spent plenty of time before that messing with her head. Firefly creator Joss Whedon used Glau’s natural grace from her years as a ballerina to hang her off ceilings and beautifully kick bad-guy butt. While Firefly only lasted one short, short season, when we finally see River take on the Reavers in Whedon’s film, Serenity, and win, it’s an awesome moment.

Glau as a Terminator seems like a natural choice now. After all, no one said that Terminators had to look like Arnold Schwarzenegger. Considering her character could only pretend to have emotions, Glau still managed to infuse Cameron with plenty of heart, often thanks to John Connor’s (Thomas Dekker) smoldering glances. And there were plenty of hints that there was more was going on with Cameron beneath the surface. Unfortunately, Sarah Connor Chronicles was canceled after two seasons, with the character’s stories unfinished.

When the Big Bang Theory guys take a train, Summer Glau sits in their car and funny ensues. She plays herself, although we can’t imagine (any more than the guys) why she’d take a train; we’re sure if Glau ever considers buying a train ticket for real, this plot—Summer Glau trapped with four geeks on a moving train—will be enough for her to reconsider.

We found a brief clip that introduces things with Glau, but here’s the link if you want to watch the whole bit … https://www.youtube.com/watch?v=JrXvajjN_mE

Glau played a paranoid schizophrenic with the ability to force people to do what she tells them to do. Tess ends up in a touching relationship with the father of 4400 technology, Kevin Burkhoff (Jeffrey Combs), and they go on the run together until they’re pulled back into the action. While Tess didn’t battle Terminators or Reavers, the character evolved over three of The 4400’s four seasons and gave Glau a chance to play a memorable role filled with depth.

Easily the best thing about The Cape was Glau’s Orwell. Her character is smart and sexy and finds herself battling bad guys often in this short-lived series. While there are hints about who Orwell really is and a bubbling of potential for that character, the series as a whole failed Glau and us.

It was exciting to see Glau added to the cast of Joss Whedon’s Dollhouse. And while there was the possibility here for another great Glau character, somehow Bennett left us a bit flat. It was just one of a string of disappointments when it came to Dollhouse, a show that never, for us, lived up to its potential.

Glau’s first TV role gave the young former ballerina a break into acting and introduced her to Joss Whedon, who would eventually cast her in Firefly and Dollhouse.

There was so much hype about Glau joining her Firefly castmate Adam Baldwin (who plays Casey on Chuck) that the guest shot actually ended up to be a bit of a disappointment. In fact, the entire thing, with different actors playing the mysterious Greta, never really worked.

A rampaging prehistoric mammoth and Summer Glau playing a girl named Jack. What’s not to love? One note: Mammoth did score an Emmy nomination for visual effects. It did not win.

Lou Ferrigno—who portrayed TV’s non-CGI version of the Hulk—got to cameo in the 2003 Hulk movie. Sure, he was only a security guard, but still … Marvel showed him some respect. Now another TV hero is pissed because he didn’t get the same treatment.

Reb Brown, who was Steve Rogers/Captain America back in the ’70s in two Captain America TV movies, says that the producers gave him the idea that he’d be appearing in the film in some unspecified role, but once production got underway, he never got a call. He feels this violates an unwritten rule of superhero remakes in which earlier actors who have portrayed a character get some sort of nod.

Brown is still up for appearing in the sequel, though, no matter how small the part. Marvel, meanwhile, had no comment, and apparently was unaware until now that Brown was upset.

What do you think? Should Brown have popped up in Captain America: The First Avenger? Or is your first response to think, “Reb Brown WHO?”

Milla Jovovich, Kate Beckinsale AND Sofia Vergara together in one movie? And that movie is an adaptation of the Danger Girl comic book series? We’re about to pass out.

According to Latino Review, the Resident Evil siren, Underworld temptress and Modern Family hottie are all attached to star in a big-screen treatment of J. Scott Campbell’s Wildstorm Comics series.

A production company called BenderSpink, which has been behind films like The Ring and The Ruins, is shopping the movie rights around Hollywood as we speak. Danger Girl debuted in 1998 with an initial seven-issue run and follows in the tradition of heroes like James Bond and Indiana Jones—except with dizzyingly curvaceous female spies as the lead characters.

Latino Review reports the film’s official synopsis as: “A beautiful adventuress joins forces with an all-female spy agency as they race around the world to recover a trio of powerful relics.”

No word yet on which studio might be interested, but with those three actresses involved, we’re certain it won’t be long before Danger Girl is kicking butt and melting screens at a cineplex near you. Now excuse us while we go take a cold shower!

Fox has announced that they will release Matthew Vaughn’s X-Men: First Class onto DVD and Blu-ray on September 9th, a mere three months after hit theaters.  The film will be offered in two different cases: one features James McAvoy as Professor Charles Xavier and the other has Michael Fassbender as Erik Lensherr aka Magneto.  The Blu-ray will include over two hours of special features, a digital copy of the film, ten Marvel X-Men digital comics including a new X-Men: First Class back story.

Additionally, the first 1,000 fans who pre-order a Blu–ray or DVD during Comic-Con will receive a limited edition First Class t-shirt announcing the fan’s preference for (ugh) “Team Charles” or “Team Erik”.  Fans can pre-order their copy in person at the Fox booth #4313 or online at www.FoxConnect.com.  The pre-order will cost $25 for Blu-ray and $18 for DVD.

This Week in Star Trek

Zachary Quinto on Star Trek 2 “Vulcan Could Be Back” 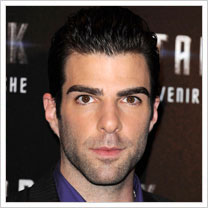 Zachary Quinto is ready to get back into Starfleet uniform and had a few words to say on the topic of the next Star Trek film, in a recent interview. During the interview with the Showbiz 411, Quinto talked about the anticipation for the upcoming sequel, what may be in store for his character Spock along with a few of the possible directions the story could go in.

“I feel like people are going to be ready for a second one by the time it comes out. It’s not like ‘Already’ ‘Really?’ ‘Again?’” Quinto said.

“I imagine we’re going to pick up right where we left off, but it could be a completely different timeline. They now basically created a device that allows them to go anywhere with it.”

1. Being recognized as the person who does Life After Trek and Subspace Communique

5. Hanging out with Vernon Wells