Our Interview with Gary Lockwood

(Frank Poole in 2001 and Gary Mitchell in Star Trek)

Question: Name an actor who was most recently seen in Warehouse 13 and has starred in such sci fi/fantasy classics such as Weird Science,  Edward Scissorhands, and Batman: Dark Knight Returns.
Prize: A print from 2001 of Frank and Dave signed by Gary Lockwood and Keir Dellea.
You will have until the first week of November  to answer this question. Send your answer with your mailing address to scifidinerpodcast@gmail.com, call us at 18885084343, or DM us on Twitter at @scifidiner. Make sure you include your e-mail with all entries! Only one entry per person.   The SciFi Diner is not responsible for any injuries occurring if you secretly decide to go all shiny and dress in a browncoat and walk into your local bar.  BE SURE TO INCLUDE THE CODE WORD mentioned in the first 15 minutes of the podcast.

The Saturday B Movie Reel Podcast

Gary Lockwood was born in Van Nuys, California. He attended the University of California at Los Angeles on a football scholarship.

He began his career as a movie stuntman, and a stand-in for Anthony Perkins prior to his acting debut in 1959 in an uncredited bit role in _Warlock_. He also appeared as a police officer in _Perry Mason_. Two series came early in his career, ABC’s Hawaii-set “Follow the Sun” (1961) in 1961-1962 cast him in as an adventurous magazine writer in Honolulu. In 1961, he appeared as a rodeo cowboy in love with an 18-year-old singer played by Tuesday Weld in ABC’s _Bus Stop_. He then starred with Jeff Bridges in “The Lloyd Bridges Show” (1962).

In 1964, he starred as a young U.S. Marine lieutenant in the NBC series “The Lieutenant” (1963), and was produced by the Star Trek creator Gene Roddenberry, and “The Man from U.N.C.L.E.” (1964) creator Norman Felton. He then starred in another NBC television series called “Kraft Mystery Theater” (1960) opposite Sally Kellerman, with whom he would again appear in the second “Star Trek” (1966) pilot, “Where No Man Has Gone Before”, as Gary Mitchell, and Kellerman as the ship’s psychiatrist Dr. Elizabeth Dehner, who both develop super powers. In 1966, he guest starred in “Reunion” of ABC’s “The Legend of Jesse James” (1965), starring Christopher Jones. and that same year, appeared as Danny Hamil on the episode “Day of Thunder” of NBC’s drama, The Long Hot Summer_, based loosely on the works of William Faulkner, as well as Hein the two-part episode “The Raid” of CBS’s “Gunsmoke” (1955) with James Arness. He co-starred with Stefanie Powers (his wife at the time) in an episode of ABC’s “Love, American Style” (1969). In 1968 he was cast as the co-star in director Stanley Kubrick‘s legendary Sci-Fi film 2001: A Space Odyssey (1968), starring as Dr. Frank Poole. In 1983 he made a guest starring role in the series Hart to Hart starring Robert Wagner, and [now his ex-wife] Stefanie Powers. Between 1959 and 2004, he had roles in some forty theatrical and made-for-TV features and made almost eighty TV guest appearances, including several as a villain on CBS-TV’s “Barnaby Jones” (1973) starring Buddy Ebsen.

Please join us Saturday night 10/29/11 from 7pm until midnight  at the Crowne Plaza in Timonium, MD, for our Second Halloween Party.

Tickets are $20 and available at the door; however, please let us know if you are planning to attend so that we can be sure to order enough supplies and seating.

Last year was a huge success and many said it was like a Masquerade and Ten Forward combined. Music, drinks, friends and costumes! What more could you want for a Halloween adventure!

Performing live at the party will be Insane Ian and Jonah Hill. Keith DeCandido will be Master of Ceremonies.  Lee and Chris Warren of Vic’s Place will be DJ’ing.  There will be snacks available, with heavier concessions and a cash bar provided by the hotel. Hotel rooms are available for Saturday night at the $105/night rate.All ages are welcome – please pass this information on to anyone else who would be interested in attending.

The Crowne Plaza has set aside a block of rooms for the evening of 10/29/11 at the special rate of $105 (plus tax). When you call to reserve your room (410-252-7373), tell them you are attending the Farpoint Halloween Party to get our rate.http://www.ichotelsgroup.com/h/d/cp/1/en/hotel/BALLT/welcome

It seems like die-hard fans weren’t the only ones who tuned into the second season premiere of AMC’s horror favorite: Enough people strapped in to make it the highest rated cable premiere in almost a decade.The Walking Dead’s premiere infected 7.3 million viewers on Sunday night, making it the biggest basic-cable premiere since USA’s The Dead Zone, back in 2002. And, if you count the folks who caught the premiere’s encores, you get 11 million folks (and that’s before the DVR numbers come in).

As AMC president Charlie Collier so humbly put it:

“The Walking Dead is one of those rare television programs that reaches both a core genre fan as well as broad audiences simply looking for a great, character-based story. … That The Walking Dead is now the most watched drama in the history of basic cable is staggering, just like our zombies.”

You know, 11 million people make for a lot of bbbrrrrraaaainnnsss. (Sorry, couldn’t resist.)

Fringe Schedule For The Rest Of 2011

Tonight on Fringe is the all new episode “Subject 9”, but next week’s episode will be a re-run of the Season 4 premiere “Neither Here Nor There”. 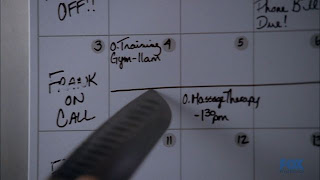 ueues up the next four Fringe episodes for “Novermber Sweeps“, which runs October 27 – November 23.

This block of four episodes will end with the “Fall Season Finale”, making them the last four we see this year. Here is the remaining schedule for 2011:

Michael Bay and Steven Spielberg in talks about 4th Transformers

It shouldn’t be a surprise to anyone that we’re not done with the Transformers film franchise just yet, but now it’s looking more concrete, and toy giant Hasbro’s CEO says the company is already talking with Steven Spielberg and Michael Bay to make Transformers 4 happen.In a conference call focusing on his company’s third-quarter earnings, Hasbro CEO Brian Goldner touched on a number of film projects the company has under development, including Transformers. Though there’s no real news on production dates or what stars may or may not be returning, Goldner said he hopes more news will arrive sometime in the next quarter.In the meantime, the company is working on the forthcoming Battleship movie, along with scripts for films based on Candyland, Micronauts, Risk, Clue, Monopoly and Stretch Armstrong. The one that seems closest to something real is Micronauts, which J.J. Abrams and Paramount are attached to, and the one that’s in the most trouble is Ouija.The eerie fortune-telling game so popular at slumber parties across America was set up at Universal Pictures but was dropped over budget concerns. Goldner said the flick hasn’t found a new studio yet, but that Hasbro is pulling a Lone Ranger on it, reworking the script and reducing the budget.So, while it seems the best toy to be if you want to be a movie star is a robot, Hasbro isn’t giving up on bringing loads of other properties to the movies. Which of your favorite board games would you like to play out on the big screen?

Image of the day: The snarkiest Star Wars T-shirt we’ve ever seen

Watch the trailer for Justice League: Doom, the next DC animated movie

After debuting at NYCC, the trailer for DC’s latest animated series has hit the web. Check out a snippet of Justice League: Doom, a new animated movie based loosely on Mark Waid’s classic Batman-screws-up-royally storyline “Tower of Babel.” The direct-to-video movie is due in early 2012

Rise of the Planet of the Apes on Blu-ray and DVD Dec. 13

has announced that Rise of the Planet of the Apes, which has earned $432 million worldwide, hits Blu-ray

A single act of both compassion and arrogance leads to a battle unlike any other when RISE OF THE PLANET OF THE APES makes its worldwide debut on Blu-ray, DVD and digital download on December 13th in North America and starting December 7th Internationally. From the Oscar-winning� visual effects team that brought to life the worlds of Avatar and Lord of the Rings comes revolutionary new ground – a CGI ape that delivers a dramatic performance of unprecedented emotion and intelligence, and epic battles on which rest the upended destinies of man and primate.

James Franco (127 Hours) stars as Will Rodman, a neuroscientist living in San Francisco trying to develop a cure for Alzheimer�s disease by testing on chimpanzees, giving them a human level of intelligence. After a test subject�s baby, Caesar, is orphaned, Will decides to raise him at home on his own with his Alzheimer-stricken father (John Lithgow; “Dexter”). What begins simply as a continuation of his experiment quickly turns into a problem for Will, as Caesar is taken away from him and forced to live in a primate facility. As Caesar�s intelligence continues to grow, he begins to stake his claim as the leader of his new primate counterparts, which will ultimately lead to the RISE OF THE PLANET OF THE APES.

Directed by Rupert Wyatt (The Escapist), this special effects blockbuster features fantastic supporting performances from Freida Pinto (Slumdog Millionaire), Brian Cox (Red), Tom Felton (Harry Potter films) and Andy Serkis (The Lord of the Rings Trilogy) in a ground-breaking performance. The RISE OF THE PLANET OF THE APES Blu-ray is loaded with bonus material including deleted scenes, making-of featurettes commentaries and more.

This Week in Star Trek :

So, how do we describe William Shatner’s singing career? Well, it’s more of a speaking career, right? Starting with his famous “Lucy in the Sky With Diamonds” released in 1968 on the album “The Transformed Man”. The Shat interspersed Shakespeare throughout the album with other hits like “Mr. Tambourine Man” & “It was a very good year”. Next, we move on to his live double album released in 1977 that features Sir Billiam (still trying) reciting scenes from “Cyrano de Bergerac” & “War of the Worlds”. Unfortunately though, there were no top forty hits to be found on that vinyl. Then, out of the blue 1978 rolls along and we see The Shat performing his famous (or infamous) rendition of Elton John’s “Rocket man” on the The Science Fiction Film Awards, which he hosted, by the way. Over the years Bill has “sang” many-a-song with his tongue firmly placed in his cheek and the most recent release is no different.

” over a year ago at the Star Trek Fan Days in Plano, TX. There The Shat explained how the idea came about…Finally, over a year later “Seeking Major Tom” is available now on CD

, & even vinyl! The album includes The Shat’s versions of “Bohemian Rhapsody”, “Space Oddity”, “Walking On The Moon”, “Spirit in the Sky”, “Learning to Fly”, and tons more. Oh, and did I mention “Iron Man”….

The Shat’s record label, Cleaopatra Records, also produced a short documentary about “Seeking Major Tom” that you can check out below.

J.P. harvey: My Five Favorite “Forgotten” SciFi Novels/Series:  (I class these as “forgotten” in that they’re not the popular “power novels” that most folks remember or talk about, but they definitely shaped my love for the genre.)