Our Interview with Author Aaron Rosenberg

Our Interview with Aaron Rosenberg 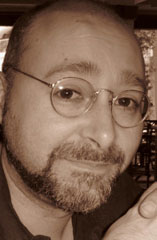 Originally from New Jersey and New York, Aaron Rosenberg returned to New York City in 1996 after stints in New Orleans and Kansas. He has taught college-level English and worked in corporate graphics and book publishing.

Rosenberg has written novels for Star Trek, StarCraft, Warcraft, Exalted, Stargate Atlantis, and Warhammer. He also writes educational books, young adult novels, children’s books, and roleplaying games. He won an Origins Award in 2003, for Gamemastering Secrets, a Gold ENnie in 2007, for Lure of the Lich Lord, and a 2003 PsiPhi Award for Collective Hindsight, Book One. His second Warcraft novel, Beyond the Dark Portal, was nominated for a Scribe Award in 2009 and his young adult novelization Bandslam: The Novel won the award for best Young Adult novel in 2010. Rosenberg wrote the first-ever tie-in novel for the television series Eureka, entitled Substitution Method, under the house name Cris Ramsay. His second Eureka novel, Roads Less Traveled, was released in early 2011. His first original novel, the space-opera Birth of the Dread Remora, was published by Crossroad Press in early 2011.

Rosenberg is also part of Crazy 8 Press, a cooperative publishing venture he started in 2011 with fellow authors Peter David, Michael Jan Friedman, Robert Greenberger, Glenn Hauman, and Howard Weinstein. His humorous science fiction novel No Small Bills was released as an e-book from Crazy 8 in September 2011 and immediately hit the NOOK Bestseller list–it rose as high as No. 33.It is slated for a trade paperback release in November 2011.

Rosenberg lives in New York City with his family.