Yesterday was a first for us at the SciFi Diner Podcast. Balticon. Sure. We’ve been to cons before.  Shore Leave and Farpoint, that bring in the huge celebrities. And we’ve developed many friendships and acquaintances through those cons. But Balticon is a different style of convention for us.  It brings out the writers, podcasters, and others that make the stories we read, listen to, and even eventually see in movies and TV happen. 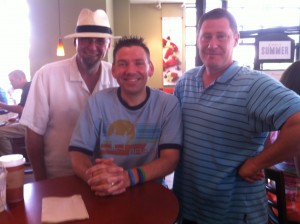 What was cool for us was hanging with some of the people we’ve interviewed on the show before.  I think one of the highlights for us was hanging with John Mierau, author of the podiobooks Enemy Lines, Asunder, and Tools and Means. We’ve had him on the podcast numerous times, and it was just cool to finally meet face to face, go out to lunch with him, hang at the bar with him, and so on.  And whether he realizes it or not, he was kind of our ticket into meeting other writers I heard about, but didn’t really know. Paul E. Cooley, Michael Sullivan, Nathan Lowell just to mention a few.

Another really cool person we meet was Dave Robinson from The Roundtable Podcast.  Again, through John, we had a chance to go out to Panera Bread together, chat about our shows and podcasting and through that developed a really cool connection.  There is a good chance you will hear Dave on the show someday.

One thing that was nice is that we didn’t do any interviews.  Whenever we go to cons, we are typically working the con for interviews and stock pile them for the following months.  But partly because we still have a stockpile of interviews from Farpoint 2012 and partly because we can conduct and record a better interview through Skype, the most we did was arrange to do some interviews with Dave Robinson, Nathan Lowell, Greg E. Colley, and others. 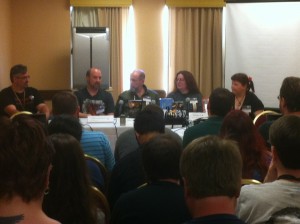 We did sit in on some panels. I sat in on one that was fanscinating called Epublish or Die where Elizabeth Black, Nathan Lowell, Greg E. Cooley, and John Mierau (unofficially) talked about how the ePublishing industy has saved many budding writing careers.  Miles sat in on a panel about how the machines and guns of the military are becoming incredibility close to what is in SciFi now.

But I would have to say that the best part of our day was simply hanging at the bar with writers, podcasters, and other media folks, just building relationships and hilarious moments.

See you on the next show!