In our sixteenth episode of the SciFi Diner Classic, we interview actor interview David H. Lawrence (Heroes & Lost). Since we do a news and interview show, it goes without saying that the news portion of our episodes often date themselves fast. And while the interviews with the people that make Science Fiction happen remain relevant and in our opinion important, most listeners will not listen back 100 episodes and wade through old news just to get to the interview. So what the SciFi Diner Classic aims to do is to share these interviews with you. If you have been with us from the beginning, then bear with us as we introduce some of our newer listeners to voices from the past. We’re bringing you just the interview and nothing else. 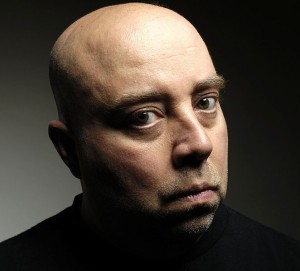 David Harvard Lawrence XVII is an American television and film actor, voice talent, network radio host, Internet entrepreneur, podcaster, demo producer, teacher and author, best known for his role as The Puppetmaster on NBC’s sci-fi series Heroes.  He was also the host of the daily The David Lawrence Show and weekend Online Tonight, both nationally syndicated radio talk shows that revolved around pop culture and the high-tech lifestyle.

The “XVII” in his name was a way for Lawrence to distinguish himself from previous David Lawrences already registered with SAG. At the time, he was the 17th David Lawrence listed on IMDB, and appended the number to his name upon his own registry.

Lawrence’s appearances on network television include playing a Serbian doctor opposite Dennis Haysbert in the CBS series The Unit, created by David Mamet, a car wash manager on another CBS series, CSI, a rock and roll wanna be on TBS’s Frank TV with Frank Caliendo, and as one of the eponymous “villains” on NBC’s Heroes. The Heroes role, that of puppetmaster Eric Doyle (one of the 12 escaped villains), was introduced in Volume 3, “Heroes: Villains” in Episode 2, “The Butterfly Effect”. The character began a multi episode arc in Episode 5, “Angels and Monsters”. Lawrence has also played the role as the station manager in Goodnight Burbank, Charles Bukowski in the musical Bukowsical!, El Gallo in The Fantasticks, as well as parts in The Children’s Hour, The Good Doctor, Born Yesterday, The Fall of the House of Usher and the role of Barry Champlain in Talk Radio. He has performed on stage at the Kennedy Center for the Performing Arts. With director Dr. Bob Pondillo PhD, Lawrence played Wallace in the short film My Name Is Wallace Lawrence also was executive producer of My Name Is Wallace. In early 2009, he appeared in an episode of the BBC reality program Beat the Boss, in which his team designed a cheesecake. In 2010 Lawrence portrayed a taxi cab driver in the sixth season of Lost, in 2011 he guest starred in the NBC comedy action series Chuck. He is also in the Fox series The Finder and TNT series Perception.

Lawrence has been involved in podcasting since the inception. He holds the title of ‘first podcaster’ since he has been sending audio to subscribers via the internet since 1994 when he started the ‘Personal Netcast’. David does voiceover work and speaks at events, including the NAB and the Portable Media Expo. David developed ShowTaxi, a subscription management for premium podcasters. He is also the host of a premium podcast called “Patrick Tucker’s Secrets of Screen Acting: The Podcast.”