In our seventeenth episode of the SciFi Diner Classic, we interview actor interview Mira Furlan (Babylon 5 & Lost). Since we do a news and interview show, it goes without saying that the news portion of our episodes often date themselves fast. And while the interviews with the people that make Science Fiction happen remain relevant and in our opinion important, most listeners will not listen back 100 episodes and wade through old news just to get to the interview. So what the SciFi Diner Classic aims to do is to share these interviews with you. If you have been with us from the beginning, then bear with us as we introduce some of our newer listeners to voices from the past. We’re bringing you just the interview and nothing else. 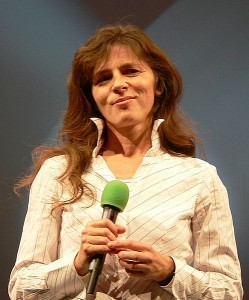 Mira Furlan (born 7 September 1955) is a Croatian actress and singer currently residing in the United States. She is well known for her roles as the Minbari Ambassador Delenn on all five seasons of the science fiction television series Babylon 5 (aired 1993 – 1998), and Danielle Rousseau on Lost.

Furlan was born to an intellectual and academic family that included a large number of university professors in Zagreb, which was at that time part of Yugoslavia. She was born to a Jewish mother, and a father of Slovenian and Croatian heritage.

Furlan graduated from the Academy for Dramatic Arts in Zagreb and holds an equivalent to the BA in theatre. She was a member of theCroatian National Theatre and frequently appeared in Yugoslav television and films, including Cannes Film Festival winner When Father Was Away on Business (1985). In the 1980s, she briefly appeared as singer for Le Cinema, a spin-off from the rock band Film.

She has also appeared on the stage in New York and Los Angeles. She has released an album, Songs From Movies That Have Never Been Made. Furlan played Minbari Ambassador Delenn for all five seasons of Babylon 5 and some of the associated TV movies. From 2004-2008 she could be seen playing the character Danielle Rousseau in the ABC television series Lost.

In 2002, she returned to Croatia after some 11 years to take the lead role in Rade Šerbedžija’s Ulysses Theatre Company’s production of Euripides’ Medea. A collection of her columns in the now-defunct Croatian magazine, Feral Tribune, was published as a book in 2010.

Furlan’s husband is director Goran Gajić, who has directed her in an episode of Babylon 5 and several plays, including a production of Sophocles’ Antigone.

In late 1991, she and her husband, who is an ethnic Serb, emigrated from the former Yugoslavia to escape the warfare which resulted in the breakup of the country, with the attendant political turmoil and ethnic tensions.