Our Interview with Kate Vernon

Question: Name an actor on BSG who played 2 different characters.  Clue. Not a cylon.

You will have until June 26  to send us your answers. Please include the code word mentioned in the first 15 minutes of the show. Send your answer with your mailing address to scifidinerpodcast@gmail.com, call us at 18885084343, or DM us on Twitter at @scifidiner. Make sure you include your e-mail with all entries! Only one entry per person.   The SciFi Diner is not responsible for any injuries occurring if you secretly decide to go all shiny and dress in a browncoat and walk into your local bar. 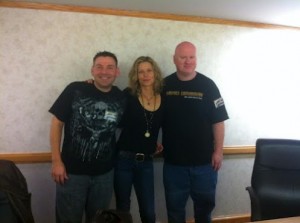 Kate Vernon (born April 21, 1961) is a Canadian-born film and television actress. She is best known for her roles as Lorraine Prescott on the CBS soap opera Falcon Crest from (1984–1985), the stuck-up and popular Benny Hanson in the comedy film Pretty in Pink (1986), Mary-John Lovejoy in ‘The Lost Colony’ episode of Lovejoy (co-starring with John Gielgud and Ian McShane), and Ellen Tigh on the re-imagined Battlestar Galactica.

Vernon was briefly (4 episodes) a regular on Who’s the Boss? in 1990 as a girlfriend of Tony Micelli (Tony Danza). She appeared in four episodes of L.A. Law in 1994 as A.D.A. Belinda Fox and seven episodes of Nash Bridges as Whitney Thomas. In 1993 she starred in an episode of Tales from the Cryptentitled “Till Death Do We Part” with John Stamos.

Vernon is known for her recurring role as Ellen Tigh on Battlestar Galactica. In April 2009, she made a guest appearance on CSI: Crime Scene Investigationentitled “A Space Oddity” which also featured cameos by her former Galactica producer Ronald D. Moore and co-stars Grace Park and Rekha Sharma.  She appeared in one episode of Star Trek: Voyager as a member of Species 8472 impersonating a human in the episode “In the Flesh”. She also guest stars in two episodes of Heroes (“Close to You” and “Pass/Fail”) as Vanessa Wheeler.

Her father was actor John Vernon, who was most famous for playing Dean Vernon Wormer in Animal House, her mother is Nancy West, and her sister is singer/actress Nan Vernon.

Fringe exec offers 1st peek at S5—which is set WHEN?

It seems the rumors are true: Fringe’s final season will, apparently, be very different from the first four years—we’re talking different-decades different.
John Noble, who portrays everyone’s favorite mad scientist, Dr. Walter Bishop, has dropped an apparent bombshell to TV Line: The majority of the fifth season will take place in the Observers-ruled world of 2036 that we glimpsed in the season-four episode “Letters of Transit.” Hello, future.
“As far as I know, we’re just jumping ahead [to 2036],” Noble said. “Walter, Olivia, Astrid and Peter are insurgents, so we know all the dirty tricks that have been played against us. We’ll be learning from the past.”
But, Noble added, the time in between won’t be forgotten, and could be referenced via “found footage” to cover major moments of interest.
If you’re wondering why Noble mentioned Olivia (Anna Torv), who was missing in the future we glimpsed in “Letters of Transit,” he said Torv will definitely be back—along with Peter and Olivia’s future-adult daughter Etta (Georgina Haig).
In case the anticipation wasn’t amped up enough, Fringe producer J.H. Wyman has given us our first look at season five—via the top-secret script for the premiere episode, dubbed “Transilience Thought Unifier Model-11.” Possibly a code name, or possibly something that blows our minds. We’ll have to wait until Sept. 28 to know for sure.

Sound off: Do you like the idea of a future-set final season?

Our selection of shows grew yet again this week, and the summer’s just getting started. Falling Skies premiered to lower numbers than it had last year, while True Blood dropped a bit but still managed to rule Sunday night’s ratings ranking. Meanwhile, Tron: Uprising dove and Saving Hope got a week-two boost.
Check out our chart and commentary for more on how your favorite shows are doing in Live + Same Day viewers and rating.

Lost Girl (Syfy)
0.91 million viewers/0.4
6-19 lost girl.jpg
It wasn’t a good week for Lost Girl. The show hit the lowest viewership of its Syfy run so far, though its rating score didn’t suffer the same fate. The Stanley Cup finals were in full swing that evening, so we might be able to chalk some of it up to that, but we’ll see how next week fares.

Teen Wolf (MTV)
1.76 million viewers/0.7
6-19 teen wolf.jpg
After a hefty drop in its first Monday on the air this season, Teen Wolf bounced back Monday, pulling in about the same number of viewers but earning a tenth of a point more in its rating. We’ll see if the climb continues.

Saving Hope (NBC)
3.98 million viewers/0.7/2 share
6-19 saving hope.jpg
After a somewhat weak start last week, Saving Hope got a viewership boost this week, putting it much closer to the 4 million mark. It broke even in the all-important demo ratings, though, and if those numbers don’t improve this might be a short-lived series.

Tron: Uprising (DISNEY XD)
0.36 million viewers/0.0
6-19 tron uprising.jpg
Bad news for Tron: Uprising. After a not-bad-but-not-great debut on Disney XD the show took a serious dive in its second week, losing enough viewers that it actually ended up with a zero demo rating score. We’ll see how the rest of the season fares, but numbers like this are never too promising.

True Blood (HBO)
4.41 million viewers/2.6
6-19 true blood.jpg
True Blood took a bit of a drop in the second week of its fifth season, but it still managed to top the night in cable performance. First Game of Thrones, now True Blood. It seems HBO is destined to rule Sunday night summer cable this year.

There are many things you’d want from a Judge Dredd movie, and most of them are spent bullet casings hitting the ground. Luckily, this first good look at Karl Urban’s take on Mega City One’s infamous enforcer has all that and more.

It’s got Game of Thrones’ Lena Headey as a scarred drug lord named Ma-Ma who’s pushing a product that slows time down to a crawl. It’s got Olivia Thirlby as Judge Anderson, with a fetching helmet-like hairdo. It’s got Urban doing his best tough-guy drawl. And it’s got a high-rise filled with people who need some hot-lead judgment.

This trailer might’ve made a bit more of an impact if last year’s Attack the Block and this year’s The Raid: Redemption hadn’t already redefined the “we’re trapped in a skyscraper stocked with baddies that need fighting” genre. And if the “power-mad drug dealer” didn’t feel like such an ’80s villain.

But let’s face it: Dredd could’ve looked much, much worse.

Deep below a desolate Utah mountain lays the largest platinum deposit ever discovered. A billion-dollar find, it waits for any company that can drill a world’s record, three-mile-deep mine shaft.

EarthCore is the company with the technology, the resources and the guts to go after the mother lode. Young executive Connell Kirkland is the company’s driving force, pushing himself and those around him to uncover the massive treasure.

But Kirkland and EarthCore are not the first to find this treasure. The mountain’s history reveals two centuries of disappearances, murder, and insanity.

The discovery of ancient platinum knives, razor-sharp despite lying untouched for 1,000 years, reveals evidence of an ancient culture. If the artifacts are genuine, they show a pre-historic empire that once spanned from the Southern tip of South America all the way up through the American Southwest.

Wealth and fame lie under that Utah mountain, but at three miles below the surface, where the rocks are so hot they burn bare skin, something has been waiting for centuries. Waiting … and guarding. Kirkland and EarthCore are about to find out first-hand why this treasure has never been unearthed.

– Was great to run with.

For all of the Warehouse 13 fans out there, our favorite android, Brent Spiner, will be joining Saul Rubinek & cast in a multi-episode arc. We’re just stoked to see Data & Kivas Fajo interact once again on the small screen… Kinda sorta. Brent will playing Brother Adrian, leader of an intensely secretive sect The Brotherhood of the Knights of the Black Diamond. Apparently the sect descended from the Knights Templar and has loose ties to the Vatican.

Brent’s first episode will be the season premiere of Warehouse 13’s 4th season, airing on July 23rd at 9PM (ET/PT). Of course Brent isn’t the first Trek alum to grace the Warehouse. As we reported last year, Kate Mulgrew, Jerry Ryan, & Rene Auberjonois have all appeared on the show. You can check out the full details from the Syfy press release below.

Brother Adrian’s sect, The Brotherhood of the Knights of the Black Diamond, is descended from the Knights Templar, loosely connected and protected by the Vatican. Like Warehouse 13, The Brotherhood’s charge is to protect various powerful artifacts from history. However, they follow no rules and will do whatever they must to fulfill their duty.

Warehouse 13 will anchor Syfy’s “Powerful Mondays” programming block this summer, followed by the second season return of Alphas at 10PM.

After the powerful, two-hour season three finale, the Warehouse team struggles with the horrible reality of the Warehouse’s destruction and the tragic loss of Steve Jinks (Aaron Ashmore), Mrs. Frederic (CCH Pounder) and H.G. Wells (Jaime Murray). With matters so desperate, Pete (Eddie McClintock), Myka (Joanne Kelly), Artie (Saul Rubinek) and Claudia (Allison Scagliotti) must decide whether to knowingly use a dangerous artifact for their own personal gain – at the risk of deadly consequences.

Star Trek scribe & producer, Brannon Braga, returns to the Trek universe to write a new chapter in the Borg saga. IDW Publishing is set to release a new series of comics featuring Picard and company as they face down the dreaded all consuming enemy. Brannon joins forces with fellow Trek scribe Terry Matalas and artist Joe Corroney to create STAR TREK: THE NEXT GENERATION: HIVE for IDW. The new series focuses on the galaxie’s fight against a full out Borg invasion. Taking the crew of the Enterprise on what IDW is calling a “dynamic new journey” that’s “packed with mind-bending twists, time-jumping action, and revered, genre-defining characters”, the new comic series will debut in September.

“It’s a thrill and privilege to be writing in the Star Trek universe again,” said Braga. “This graphic medium will provide the narrative ambition and visual scope this story deserves — the final chapter in The Borg saga!

5. “Somebody woke up on the wrong side of the pod”. – After getting Todd out of a stasis pod aboard a Hive Ship.

4.”I am great with kids…the little ones that don’t talk back.” – When Teyla had her child.

3.”You just can’t resist bringing up the fact that I once accidentally destroyed a couple of planets, can you?” – To John Sheppard after being commented how he should be used to removing planets from the Ancient database, after destroying the Replicator Home World.

2.You wouldn’t shoot an unarmed upside down man?!. – When caught in a trap laid by Ronon Dex, hanging upside down.

Dr. Rodney McKay: Look, I mean no disrespect, but this guy’s heavy and ever since I was shot in the ass by an arrow, I’ve been prone to sciattica.