SciFi Diner Podcast Ep. 146 – Our Interview with J.W. Holmes and Mark Brayer (Creators of the comic book The Nordic)

Our Interview with J.W. Holmes and Mark Brayer

(Creators of the comic book The Nordic)

J.W. Holmes is the former CEO and Chairman of a FOX News Radio affilate, he was an executive producer and host of a local ESPN show, a broadcaster, producer, currently an author, and a U.S. Army veteran. He began his career in writing in the early 1990’s. His screenplay for “The Nordic” was first pitched to the BBC and Sky in the UK market, later transforming it into a sci-fi book selling in 7 countries, thus giving way to the comic book series for the book of the same name.

Mark Brayer is a freelance illustrator/cartoonist with his own studio, Lightspeed Studios, and has been working in the field for over 25 years. He has created a vast amount of art from greeting cards, comic books, illustrated characters, book covers and illustrations, magazines, corporate logos and branding, websites and graphic design. Mark has been drawing since he was very young. “I drew all the time–at home, school, wherever I could find a piece of blank paper. I would sit down for hours and fill the page with drawings…By creating and drawing things around me, it opened the door to my imagination, and new creations have been coming out ever since.” He not only loves bringing life to his own creations, but teaching the craft as well. He has taught cartoon workshops for kids at schools and libraries whenever he has the chance. “They love it when they learn how easy it can be to create a cartoon character of their very own…it makes their day.” Mark resides in Indiana with his wife and daughter. 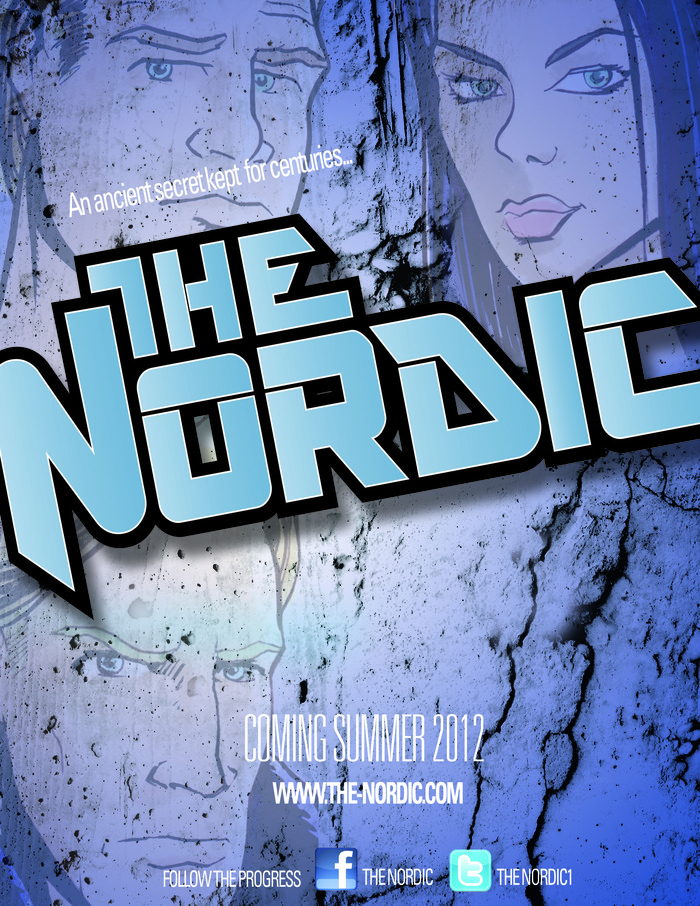 “The Nordic” is a comic book series based on the adventures of William Davidson who is singled out by an alien race to find the truth of the human race here on Earth.

Taking place in the UK in a town called Sunbury, “The Nordic” is a story of William Davidson, who discovers his genetic make-up is far closer to those of the Nordic alien race than anyone else’s on Earth. Because of his near perfect DNA, he has been sought out and befriended by a liaison of the Nordics named Bertil, to mentor and prepare him for announcing the truth of human history on Earth and how we came to be. But first, William and Bertil must work together to find out what that true history is! Beaten down constantly, William must persevere through the annoying trials given to him by his political power-hungry aunt, out run the real Men in Black, as well as outhink, although sometimes ally with, the U.S. military who are trespassing on UK soil to keep William quiet about whatever truths he finds, and battle back nefarious aliens who also have reasons to keep William quiet, all the while somehow keeping his personal life somewhat balanced.

HOW YOU CAN HELP

They have a kickstarter campaign with some perks you just gotta check out.  You can do so here.

What Will the Money Be Going For?

After Kickstarter takes their percentage and taxes are paid on your contributions, the remainder will be used to help us get over the hump of printing cost, mass marketing, promo materials, and lets not forget the expense of conventions, something we are in dire need to being able to do to successfully make this a strong year for The Nordic.

If our Kickstarter campaign goes well, we will be able to run first printing almost immediately, giving us the ability to launch in print and digitally with 30-45 days, so we should have the first issue of The Nordic in stores by August. If we overshoot our budget and depending by how much, we should be able to have the next issue out right away after that, the following month of the month after. On thing Mark and agree on is 1) not making readers wait long for the next issue, and 2) giving readers not only strong artwork, but also a strong detailed story-line. This is what we deliver in The Nordic. The Nordic is not another b&w comic, but is in full color. Directly after launching comic book series, the fiction book for The Nordic will be released and we will start in on a graphic novel for the holidays, hopefully. All this depends on whether or not we have a successful campaign here on Kickstarter, and how much we overshoot our mark on here as well.