No Small Bills – Now Available as an Audiobook; Narrated by Scott Hertzog 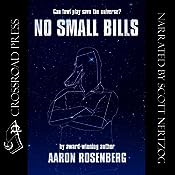 Yeah, that’s right! My very first audiobook is available through Audible, iTunes, and Amazon. Earlier this spring I narrated the novel No Small Bills  from award-winning, best-selling author Aaron Rosenberg, in conjunction with Crossroads Press. What do you get when a cubical office worker with the head of a duck, a hot blonde, a plumber, and an FBI agent walk into a bar? You get No Small Bills and the hilarity that ensues.  No Small Bills is a Scifi-Comedy in line with the satire and wit of Douglas Adams, and let me tell you, it is hilarious.  I can’t recall how many times I just laughed when I was narrating the book.  This resulted in much rerecording. I think what made DuckBob, the main character, such an identifiable hero for me is that he is so human, so much like a regular guy, and so me. Eh, so he has the head of a duck. Who doesn’t at least feel that way sometimes? After awhile, I even kind of forgot it was there. But it was integral to the story. And then there is Mary…ah, Mary… And that’s all your getting. You gotta listen to the book yourself. Below is a synopsis from the Audible.com page.

DuckBob Spinowitz has a problem. It isn’t the fact that he has the head of a duck – the abduction was years ago and he’s learned to live with it. But now those same aliens are back, and they claim they need his help! Apparently creatures from another reality are invading the universe, and only DuckBob can reset the device that maintains the barrier between dimensions. He reluctantly agrees to help, but how can a man whose only talents are bird calls and bad jokes, and whose only work experience is punching random buttons on a computer in a standard cubicle, be expected to save the universe?

The best news:  the story doesn’t end with this book. Too Small For Tall, the sequel, is set to be released in the coming months. No word yet on whether I’ll be narrating it. So if you love audiobooks and haven’t read this book yet, what are you waiting for? Get it now from Audible, iTunes, or Amazon. Even if you have read the book in digital or paper format, Aaron and I would love to have you support this endeavor.  Please consider buying the book. And in advance, we thank you very, very much.

**No Small Bills is the hilarious new science fiction novel from award-winning, best-selling author Aaron Rosenberg, who has written books for Eureka, Star Trek, WarCraft, and many others, and is also the author of the rousing Dread Remora space-opera series for Crossroad Press.