Thoughts on Looper, and More

Question: In the episode of Falling Skies “The Armory”: Having captured Tom and the others during the raid on the armory, John Pope gives Tom this nickname. What is it?

What the Cast Podcast

Here comes another sci-fi remake. The folks behind ABC’s V (circa 2009) are tackling a new series. Get ready for a revamped version of Space: 1999.

According to The Hollywood Reporter, ITV Studios America and HDFilms have announced plans to unveil a “re-imagining” of the sci-fi series, which will be called Space: 2099.
The original program ran for two seasons (1975—1977) and starred Martin Landau and Barbara Bain. As expected, the story took place in 1999 and followed the inhabitants of Moonbase Alpha, a space research center stationed on—you guessed it, the moon.
HDFilms president Jace Hall (who brought us the new V) claims that Space: 2099 will feature familiar themes taken from the original.
“We are indeed re-imagining the franchise and bringing something new and relevant to today’s audiences,” said Hall. “I feel strongly that some of the overall tones set by the original Space: 1999television show represent an exciting platform to explore possibilities.”
Do you feel concerned? A lot of space-centric shows have come and gone since 1977. How will they make Space: 2099 stick out from the rest of the pack?
Will you be tuning in to Space: 2099? Or will you stick to the original?

In the futuristic action thriller Looper, time travel will be invented – but it will be illegal and only available on the black market. When the mob wants to get rid of someone, they will send their target 30 years into the past, where a “looper” – a hired gun, like Joe (Joseph Gordon-Levitt) – is waiting to mop up. Joe is getting rich and life is good… until the day the mob decides to “close the loop,” sending back Joe’s future self (Bruce Willis) for assassination. The film is written and directed by Rian Johnson and also stars Emily Blunt, Paul Dano, and Jeff Daniels.

Joss Whedon WILL be back for Avengers 2 (But wait, there’s more!)

It’s been three months since Joss Whedon’s The Avengers hit theaters and became one of the biggest movies ever, and ever since we saw it we’ve been wondering if Whedon would come back to bring his particular brand of awesome to a sequel. Well, now it’s official—but apparently Avengers 2 isn’t the only thing we can expect from Earth’s Mightiest Director.
The news came courtesy of Marvel’s owner, Disney, when Walt Disney Company CEO Robert Iger announced Whedon’s return during a call discussing the company’s latest earnings reports on Tuesday. But Iger made it clear this is about more than just a movie. He wants to “leverage the power of the Avengers” as much as possible, and in that spirit Whedon will also be moving to the small screen to develop a TV series for Marvel.
That’s right. Joss Whedon’s returning to TV in the Marvel Universe.
We don’t know yet what exactly this TV project will focus on, or when we’ll see it, but this definitely confirms the Marvel collaboration with ABC we heard about last week. And with Guillermo del Toro still working on his own Hulk TV show, we could be set up for a very big TV push for Marvel in the coming years.
Of course, we knew already that Avengers 2 would be headed our way (with more than $1 billion at the box office for the first one, how could it not be?), but the official addition of Whedon to the second flick definitely adds a thick new layer of interest, not to mention a strong built-in audience. And after all the epic badassery Whedon brought to the first film, we can only imagine what he’ll do with the second, especially with that awesome mid-credits villain setup. 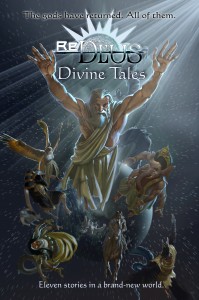 The gods came back.

The change promised by the ending of the Mayan Calendar in 2012 manifested itself in an unexpected manner. Every pantheon of gods and goddess, from every belief the world over have returned … changing the world forever.

As the pantheons settle into their ancestral lands, they vie for worshippers, gaining or losing power along the way. They find the world of man a bewildering crazy quilt and each wishes to remake their lands in their own image.

Come and meet some of the inhabitants of this strangely familiar world in eleven new tales that explore what it means to worship in this new reality. But while the tales may be new, the stories are as old as time itself.

If there are few things in the world that live up to they hype built around them, Trek Nation has got to be one of the shinning examples. We’ve been writing about the the Roddenberry Productions documentary for years now and after seeing it in November of last year, it was definitely worth the wait. Now, you can check out the film twice at the biggest licensed Star Trek convention on the planet.

That’s right kiddies, Rod Roddenberry and Roddenberry Productions will be screening Trek Nation at Creation Entertainment’s Star Trek Las Vegas Convention… or as we loving call it… Vegas Khhaaan! August 9th & 10th at 8pm respectively, Rod will be sharing his documentary with the Trek faithful (with a Q&A session August 10th at 4:30 p.m.). If you can’t make it, we’ll be there live blogging the event. Otherwise, get your Andorian and or Vulcan buns down to the panel.

If that isn’t enough, we’ve got an exclusive, Roddenberry Productions will be offering a special edition DVD release of Trek Nation with commentary from producers Rod Roddenberry & Trevor Roth. Yup, it’s your first chance to get your hands on a physical copy of Trek nation… don’t miss it!

You can learn more about the special Trek Nation screenings at Roddenberry.com.

Through the Fire – Life After Star Trek

A new film created by and starring Star Trek actors

“Through The Fire” is a romantic comedy about a couple of dazzling New York urbanites who are set-up on the worst blind date ever, only to find out they have more in common than they realize. Despite their professional differences (she is an acclaimed Broadway actress and he is the theater critic who gave her a horrible review) they cannot get each other out of their minds. “Through The Fire” shows what happens in the ultimate battle between the head and the heart.


I am making this movie, along with several of my friends from Star Trek, because we want to get back to the craft of filmmaking. Our formula is simple…. great script, great actors, great crew, and great directing, equals great profitability.

We also want to show the the people who run Hollywood that “sci-fi” fans are not only interested in science fiction, but are multidimensional and a force to be reckoned with.

Directing this movie means “Freedom” for me. All I’ve ever wanted from the beginning is to have the artistic freedom to choose the projects that speak to me and this is my chance. Why Kickstarter? I love the Internet. It’s one of the most useful tools ever invented and we are just starting to see the potential for artists to get their projects directly out to the people. Your help will make this movie a reality and everything you pledge will go straight to toward that goal.

Like Worf, the character I have played for so many years, I have always had a strong “logical/rebellious” or “Logibellious” streak in me. From an early age people have told me what I can and can’t do. It was nothing malicious, but my logical mind would look around and see examples of other individuals doing exactly what I was told couldn’t be done. I had to ask my favorite question… “Why?”

My favorite answer is “Why not?” Without exception, this has led to great success.

From the film “Field of Dreams,” “If you build it, they will come.” Together, let’s make this dream a reality.