Our Interview with Nicholas Eftimiades

(Author of Edward of Planet Earth and

Question: Who was Starman, in the movie by that name?


You will have until December 11th to send us your answers. Please include the code word mentioned in the first 15 minutes of the show. Send your answer with your mailing address to scifidinerpodcast@gmail.com, call us at 18885084343, or DM us on Twitter at @scifidiner. Make sure you include your e-mail with all entries! Only one entry per person.   The SciFi Diner is not responsible for any injuries occurring if you secretly decide to go all shiny and dress in a browncoat and walk into your local bar. 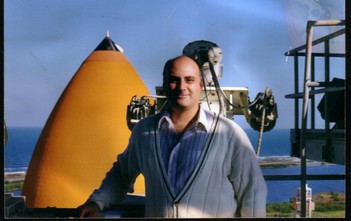 Nicholas Eftimiades is an American government official, author, and educator best known for his work Chinese Intelligence Operations (1994). He currently resides in the London area.

Eftimiades graduated from George Washington University with a B.A. in East Asian Studies and the National Defense Intelligence College with a M.S. in Strategic Intelligence. He also did undergraduate and graduate work in Asia. He is a Visiting Research Fellow at Kings College, War Studies Department, London, United Kingdom.

Mr. Eftimiades has provided numerous briefings and testimony on national security, technology, and space exploration issues to senior policy officials and the U.S. Congress. He testified before the President’s Commission on the Moon, Mars, and Beyond. He has sponsored and chaired international conferences on U.S. and foreign defense policy issues. He is a frequent lecturer and public speaker on future technology and societal changes and national security issues.

Eftimiades first came into public view in 1994 with the publication of his book Chinese Intelligence Operations (Naval Institute Press, Annapolis MD., March 1994). The book is an examination of the structure, operations, and methodology of the intelligence services of the People’s Republic of China. The book received worldwide recognition with the Chinese government declaring Eftimiades “an enemy of the people” in the People’s Daily newspaper. To date, the book remains the only scholarly analysis of China’s intelligence services and operational methodology.

Chinese Intelligence Operations gained worldwide attention when one of the Chinese companies identified as having a relationship with China’s intelligence services was caught giving money to the Clinton presidential campaign through the Democratic National Committee. That set off a media firestorm with Eftimiades appearing on TV, radio, and quoted in newspapers. He appeared on CBS Evening News with Connie Chung, Dateline NBC, ABC’s Day One, BBC America, National Public Radio and dozens of other television and radio broadcasts. Some organizations protested the CBS news broadcast as being racist. Eftimiades testified before the U.S. Congress on several occasions.

Eftimiades’ most recent work is a political and philosophical satire entitled Edward of Planet Earth. The book is influenced by authors such as Alexander Zinoviev and Ignazio Silone—names not normally associated with science fiction. The story takes place 200 years in the future and centers on a man, his computer friends, a female companion and their quest to communicate with the Almighty.

In 2001 Eftimiades founded a non-profit educational organization called Federation of Galaxy Explorers to inspire youth interest in science and engineering. Students in the Galaxy Explorers program attend after school “Mission Team” meetings where they participate in hands-on lessons that support National Science Education Standards. Mission Team members are rewarded for participation and achievements with ribbons, patches, medals, and certificates.
Synopsis for Edward of Planet Earth

200 years in the future Edward Temple, a “uniquely ordinary person” becomes caught up in a zany world
where self-aware super-computers are as argumentative, egotistical, demanding, and emotionally
needy as the humans they serve. Everything is fair game as Edward navigates befuddled governments,
psychotic software, greedy corporations, overly attentive robots, and romance. And of course jelly
donuts find their way into the story.

Edward is drawn into a quest to discover the true nature of God, which computers believe to be more
software than spiritual. Joining him in this adventure is Amanda Schoor, an attorney who Edward
befriends, and Mega Brain, an advanced artificial intelligence software protocol that has uploaded itself
into Edward’s brain.

The science and technology that characterizes the environment in the book is an extension of the
today’s most advanced research and development efforts. Computers with Artificial Intelligence drive
cars, taxicabs, buses, and aerospace planes. Technology development taken to extreme conclusions
places the characters in outlandish, comedic situations. The quest to discover God challenges society’s
philosophical and religious underpinnings, also placing the characters in outlandish, comedic situations.

So buckle up and put your seat backs and tray tables in the upright positions and join the adventure
today.

Praise for Edward of Planet Earth

“Edward of Planet Earth”is a delightful, informative, unusual, satirical and unique story, challenging both
our imagination and reality as we look 200 years into the future. At times Edward’s and Earth’s future
may seem universally outrageous and over the top from our present day perspective, but as in all good
science fiction, we can easily find ourselves transported to Edward’s world and that alone is a big part of
enjoyment coming from reading this book.”
-Dr. David Livingston, The Space Show