Nick Salva in Arrow, and Emerson in Man of Steel)

In our twenty-eighth episode of the SciFi Diner Classic, we interview Tahmoh Penikett (Karl “Helo” Agathon in Battlestar Galactica, Paul Ballard in Joss Whedon’s Dollhouse, Nick Salva in Arrow, and Emerson in Man of Steel). This ep[isode was recorded at Farpoint and the room noise does make the interview sound rough. Since we do a news and interview show, it goes without saying that the news portion of our episodes often date themselves fast. And while the interviews with the people that make Science Fiction happen remain relevant and in our opinion important, most listeners will not listen back 150 episodes and wade through old news just to get to the interview. So what the SciFi Diner Classic aims to do is to share these interviews with you. If you have been with us from the beginning, then bear with us as we introduce some of our newer listeners to voices from the past. We’re bringing you just the interview and nothing else. 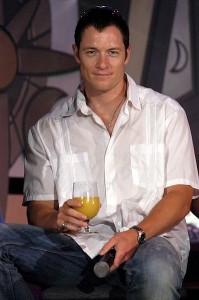 Penikett is the son of former Yukon premier Tony Penikett, who immigrated to Victoria, British Columbia from England at age 12, and Lulla Sierra Johns, of theWhite River First Nation in the Yukon. He has two siblings, twin sisters Sarah and Stephanie. He graduated from the Victoria Motion Picture School and studied at the Lyric School of Acting in Vancouver.

Penikett currently lives in Vancouver with his family.

In support of the Babz Chula Lifeline for Artists Society, which is raising money for their friend and fellow Canadian actor Chula’s cancer treatment, Penikett and his Battlestar Galactica colleague Kandyse McClure auctioned off the opportunity to have dinner with both of them in Vancouver in April 2008.

He trains in muay thai and has showcased his ability in various roles, including in Battlestar Galactica and most notably as Agent Ballard in the fight sequences in Dollhouse, where he choreographed most of his own moves.

In 2002, he had a brief appearance as one of the first Human-Form Replicators in the season 6 episode of Stargate SG-1, “Unnatural Selection”. From 2004-2005, Penikett portrayed Ray Chase, who appeared in eleven episodes of the Canadian police drama, Cold Squad. He played a leading role as Noah Hamilton in the 2005 made-for-TV film Hush alongside actress Tori Spelling. He did a voice actingrole in the video game Need for Speed: Carbon, as a street racer named Darius. He also appeared in four episodes of the television series Whistler as Elias Noth. Penikett also provided voice talent for antagonist Troy Hammerschmidt on the Adult Swim show Titan Maximum. In 2010, Penikett played the lead role of Matt Ellman on Syfy’s miniseries Riverworld an adaption of the science fiction books written by Philip José Farmer of the same name. He starred in the first two episodes of Warner Brothers’ Mortal Kombat: Legacy as Kurtis Stryker, which debuted in April on YouTube.

Among his early acting work were stints on assorted Canadian TV series such as Cold Squad. He also appeared on the TV show Smallville, in the episode “Resurrection” in Season 3, and in the Season 6 episodes “Nemesis” and “Prototype”. He portrayed a police officer for a predominantly gay neighborhood in the 2004 The L Word episode “Losing It”, which starred Battlestar Galactica co-star Nicki Clynein a related storyline.

The role was not based on a character in the original series, and was meant to be confined only to the miniseries; in the miniseries Helo is shown giving up a spot on a spaceship fleeing the doomed planet ofCaprica, with the implication that he was left to die. However, both the producers and test audiences were sufficiently impressed with the character, and Penikett’s performance, that the decision was made to make Helo a recurring character on the show. A plot that took place over much of the show’s first season was that the Cylons on Caprica kept Helo alive in order to have him fall in love with, and impregnate, a Cylon (Helo was chosen because his crew partner, Sharon Valerii, was in fact a Cylon, and another copy of the same model was sent to pretend to be her). By the second season, his character had returned to the Galactica; as the father of the only successful human-Cylon hybrid; this character and his family became central to the show’s mythology.

In 2009, Penikett was cast as Paul Ballard in Joss Whedon’s science fiction drama television series Dollhouse, airing on Fox network Friday nights at 9:00. During the first season, Ballard was the purported “good guy” cop who was trying to bring the Dollhouse down; however, an unhealthy fixation on Echo (the main character, portrayed by Eliza Dushku), as well as other factors, led to his expulsion from the FBI. In an attempt to both save Echo and himself, and in exchange for releasing former lover November (Miracle Laurie), Ballard joined the Dollhouse as Echo’s handler during the second season, and worked insidiously from the inside in an attempt to set the dolls free from what he perceives as slavery and to bring not just the Dollhouse but the power-hungry Rossum Corporation behind it down.

During the post-apocalyptic future world shown in the “Epitaph” episodes (“Epitaph One” from season one and “Epitaph Two: Return” from season two), Ballard is displayed as having joined Echo as a freedom fighter working to restore order to the world and build a place referred to by the other free characters as “Safe Haven”. He is killed without warning by a stray bullet in “Epitaph Two”, though his personality is uploaded into Echo by the end of the episode.

Dollhouse was canceled at the end of its second season, and the series finale aired on Friday, January 29, 2010.