SciFi Diner Podcast Ep. 168 – Our Interview with Christof Laputka from The Leviathan Chronicles

Our Interview with Christof Laputka

from The Leviathan Chronicles

Trivia Question: Peter Weller is in the new Star Trek Into Darkness movie. What other Star Trek project did he guest star in?

You will have until April 29th to send us your answers. Please include the code word mentioned in the first 15 minutes of the show. Send your answer with your mailing address to scifidinerpodcast@gmail.com, call us at 18885084343, or DM us on Twitter at @scifidiner. Make sure you include your e-mail with all entries! Only one entry per person.   The SciFi Diner is not responsible for any injuries occurring if you secretly decide to go all shiny and dress in a browncoat and walk into your local bar.

Christof Laputka, embodies what it means to be Inspiring! Christof gave up a successful career to follow his dream and live out his passion. Ex-investment banker, Christof Laputka decided to follow his dream of being an author by ditching his suit and embracing the growing world of podcasting by telling his fantastic stories in a new and visceral way. He has over 10,000 fans worldwide that wait for his new episodes to drop every few weeks to fuel the fantasy of an underwater world of immortals that fight a civil war breaking out across the globe. One woman holds the key to uniting the two warring factions, if only she can stay alive long enough to uncover the secret that lays within Leviathan.

His groundbreaking work in the The Leviathan Chronicles has already garnered praise and awards from the podcasting community. The Leviathan Chronicles is a podcast (just an audio file really) that one downloads and listens to in their iPod. His production features a cast of 60 actors in New York, London, and California and special sound effects that would make Hollywood jealous. I’ve listened to them myself and I can only describe it as a movie for your ears. There are 25 episodes available now for Season 1 of Leviathan.

Best yet, season 2 is now here!  From the Leviathan Chronicles site:

“Today, I’m incredibly proud to announce to launch of Season 2 of The Leviathan Chronicles.  This is a huge day that is over two years in the making as the team and I have worked hard to push the boundaries of audio drama forward, and continue the immortal saga of Leviathan.  Season 2 will be released in two parts, and unlike previous seasons, you get all the episodes NOW!

The Director’s Cut of Season 2 is now available for purchase here! Buy it now and get the first 13 episodes in Season 2, including one hour of exclusive BONUS storyline that won’t appear in the podcast.  You can now listen to the first half of Season 2 at all at once, and not have to wait weeks between episode releases. 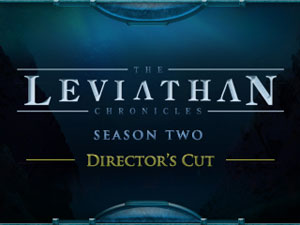 Season 2 picks up just moments after the dramatic conclusion of Season 1.  Evangeline is in a coma after Bennu’s vicious attack.  Macallan and Anton must now deal with the power vacuum within Leviathan as the city continues to self-destruct due to the deadly computer virus infecting the city’s AI.  Tulley and Oberlin are reunited in Tibet, but must now grapple with being separated from the women they love, while being hunted by the Yakuza for the financial debt they owe.  And Seinshun has now joined forces with The Blackdoor Group to find the aliens that are now trapped somewhere on Earth.  But the aliens are harboring a secret that could destroy Leviathan, and the rest of humanity.

Please support us by purchasing The Director’s Cut of Season 2 for $19.99 and listening to the most explosive episodes that we’ve ever produced.   In addition, Season 2 (as well as our Special Edition Episodes) can now be gifted to your friends!  The Leviathan Chronicles make a terrific present to anyone who has a long drive, tough commute or just likes to spend hours on the treadmill.  Just enter their email at checkout and they’ll get the download link for all the audio drama goodness!

HBO renews Game of Thrones for S4 (but what did you expect?)

HBO wants more dragons and drama. Tuesday, the network confirmed that Game of Thrones has been renewed for a fourth season. The announcement comes just two days after the show’s third season premiere. We’re not surprised by their decision considering Thrones growing fanbase.

Via the press release:

Game of Thrones is based on the fantasy book series by George R.R. Martin. The current season will consist of 10 episodes and once again follow the trials and tribulations of Westeros.

Are you excited for another season of Game of Thrones?

Now, the actor, best known for his role as the original Sulu in the Star Trekuniverse, revealed that he’ll be starring in a J.J. Abrams Star Wars reboot called Star Wars: Galactic Empire, set to start filming early next year. In the new film, Takei will stretch his acting abilities to the limit in the role of Master Ceti Maru, a member of the Jedi High Council.

Check out a promo still here below of Takei as Master Ceti Maru, which the actor posted to his Facebook page. Also, here’s the original news he posted on his page today, April 1, 2013.

Friends, I am thrilled to announce that I’ll be starring in the Star Wars reboot directed by JJ Abrams. I’ll be playing Master Ceti Maru, a member of the Jedi High Council. The new film, entitled “Star Wars: Galactic Empire,” is greenlit and will begin filming sometime early next year. It is truly a moment for The Star Alliance. Thanks to all my fans for their decades of support.

CHECK OUT THE TRAILER FOR PERCY JACKSON: SEA OF MONSTERS

This Summer we can expect a fun movie for the whole family in Percy Jackson: Sea of Monsters which is the sequel Percy Jackson and the Lightning Thief, bothof which are books by Rick Riordan. While this maybe one of those times when I haven’t actually read the books that inspire the movies, Nathan Fillion (Hermes) is an easy sell for a good time at the movies.

In this retelling of Rick Riordan’s book, “The Sea of Monsters“, Percy Jackson, accompanied by his friends Annabeth Chase, Clarisse La Rue and Tyson, his half brother, goes on a journey to the Sea of Monsters to retrieve the Golden Fleece and save Camp Half-Blood.

It does just really look like a good time. It looks like it makes fun of itself in all the right places and the cool effects looks fun. I’m looking forward to it.

5. You lost your hand because you’re a simple minded piece of s**t.

2. Hershel Greene: My father didn’t bother with comforting lies, he used his fist. He was a loveless, violent drunk, and no good to anybody. He drove me from home when I was fifteen. Didn’t lay eyes on this place again for many years. I was not at his death bed, Rick, I would not grant him that. And to this day, do not regret it. Some men do not earn the love of their sons. I don’t see you having that problem.