On this SciFi Rewind, Rick Snodie join Scott, Miles, and M from the SciFi Diner Podcast, and they rewatch the Fifth Element and share their favorite characters, scenes and delve deep into the facts and stories behind it.  The article we referenced in the show is embedded below. In our next rewatch, we will be rewatching the iconic film Jurassic Park. Be sure to watch Jurassic Park with us and send in your thoughts by the end of June.  If you want to share your SciFi Rewind with us and have us talk about it on the show or if you want to comment on our rewinds, please e-mail us at scifirewind@gmail.com (you can attach an mp3 audio file if you want) or call us at 18885084343.

The Alchemical Romance of The Fifth Element

Like The Matrix, the 1997 film The Fifth Element mines the feverishly imaginative world of comic books. But whereas The Matrix derives from Marvel Comics and manga, The Fifth Elementdraws its visual punch from French comics, formally known as bande desinee (BD), familiar to readers of the American magazine Heavy Metal, which reprints a great deal of comics from Europe. 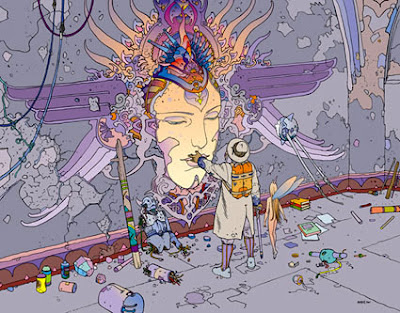 Bande desinee is, like manga, a medium and not a genre. Any number of types of stories are produced, usually in hardcover oversized albums. But the most familiar form of BD to American readers are the kinds of outrageous and decadent science fiction yarns serialized in French magazines like Pilote and Metal Hurlant.

These sci-fi stories are characterized by lavish, nearly-baroque art and design, and a narrative sensibility that emphasizes sophomoric nihilism, sadistic violence and decadent sex. 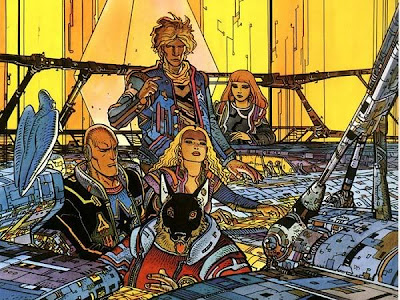 The dizzying visual imagination of the BD sci-fi subculture is mirrored in The Fifth Element . In fact, Besson enlisted one of BD’s premier talents, the late Jean Giraud, to forge the visual look of the film. Giraud is known to BD readers by his pen names ‘Gir’ and ‘Moebius.’

As Gir, he drew the long-running adventures of the Western hero,Lieutenant Blueberry. And as Moebius, he illustrated a large body of science fiction stories, often in collaboration with Alejandro Jodorowsky, the South American filmmaker best known for his films El Topo and Santa Sangre. 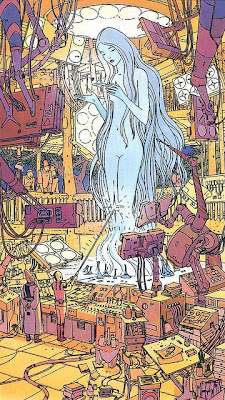 Giraud’s own work is also of a distinctly spiritual bent, but defining the precise nature of that spirituality is often elusive. Moebius was the follower of a French New Age guru named Jean Paul Appel Guery, who changed the course of Moebius’ work from dystopian sci-fi to incredibly opaque new age sci-fi. Moebius had also worked on several sci-fi/fantasy films, including Alien, Willow and The Abyss. 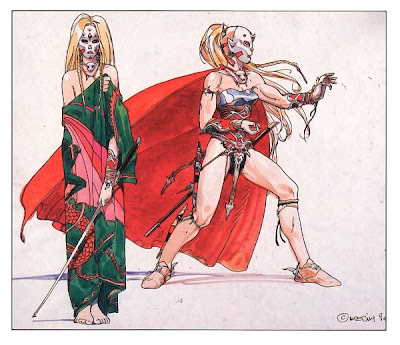 Besson also enlisted the visual talents of another French legend for The Fifth Element. Jean Paul Gaultier, the fashion maestro best known for his work with Madonna, designed many of the sexually-provocative costumes for the film, and gave the film a distinctly decadent and androgynous sheen.

The plot of The Fifth Element. concerns a struggle between the forces of good, here in the form of the alien Mondoshawans and their human accomplices; and the forces of evil, represented by a malevolent Death Star-like planet (known only a “Mister Shadow”) and its alien and human enablers. Gary Oldman, scenery-chewer extraordinaire, plays Zorg, an evil weapons manufacturer who works in concert with the alien Mangalores to help make manifest the destruction of earth by this ultimate Evil. 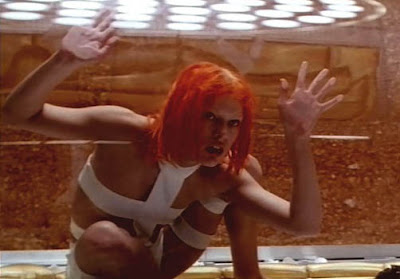 The Mondoshawans send their champion, the so-called “Supreme Being”, to Earth to help destroy the Ultimate Evil, but the Mangalores shoot down their ship before it can reach the Earth. A salvage team is sent to the crash site (which is on a moon) and a piece of a arm is recovered, which turns out to be from the Supreme Being.The severed limb is brought to Earth and through some kind of DNA something-or-other is reconstituted into an intact replication of the supreme one. Happily, it transpires than underneath their bulky and cartoonish armor, the Mondoshawans look like hot, young, naked supermodels. Hence LeeLoo, the reconstructed supreme being, is played by hot, young, naked supermodel Milla Jovovich.

However, LeeLoo freaks out when she is reborn, busts out of her rebirthing chamber and ends up in the care of soldier-turned-cabbie Korben Dallas (played by Bruce Willis). At her urging, Dallas then brings Leeloo to the priest Father Cornelius, played by Ian Holm. Cornelius is part of a hereditary line of priests that do the Mondoshawan’s bidding in protecting the Earth.

What must be done next is to recover the ritual stones symbolizing the four elements and get LeeLoo to Egypt post-haste, in order to perform the ritual that will repel and destroy “Mister Shadow.” However, the stones are being kept by an alien chanteuse on a galactic pleasure cruiser halfway across the galaxy.

Hence, Dallas, Cornelius and LeeLoo rocket out to the cruiser to recover the stones. Along the way, LeeLoo immerses herself in human lore and language, with the aid of a laptop computer supplied to her by Father Cornelius. The messianic troupe also make the acquaintance of a maniacally-epicene galactic talk show host named Ruby Rhod, played by Chris Tucker.

Along the way they are countered by Zorg and his Mangalores cohorts. All sorts of mayhem ensues, and the alien singer protecting the stones is killed by the Mangalores. As she lays dying, she tells Dallas that the stones are located inside her body, and Dallas must pull them out of her corpse. Zorg is also after the stones, but is ultimately destroyed by a bomb he places on the cruiser (literally ‘hoisted on his own petard’, you might say). Dallas, Cornelius and LeeLoo escape just in the nick of time and return to Earth to perform the ritual.

The trip back seems to be going well until LeeLoo stumbles across the subject of war in her humanities studies. She is so driven to despair by visions of man’s inhumanity to man that she is unable to perform the ritual. The stones are put into place, but the Fifth Element isn’t activated.

Cornelius reckons that LeeLoo needs a first hand lesson in the ways of love to ease her despair over man’s barbarism, so he orders Dallas to have a snog with her. Dallas and LeeLoo neck and the Evil Planet something-or -other is destroyed in an orgasmic burst. The film ends as Korben and LeeLoo enjoy a hearty shag in a sarcophagus-type reactor chamber in a Nucleo Lab, as the President of the Earth and a worldwide television audience look on. 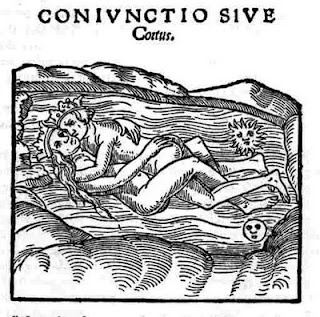 Aside from the obvious comic book, action movie and Solar ritual drama motifs, Besson seems to borrow heavily from Alchemical symbolism. Or, more precisely, Jungian interpretation of Alchemical symbolism.That final scene where Korben and LeeLoo copulate in the reactor chamber while the lord of Earth look on is directly taking it cues from three of the pivotal stages of Alchemist’s so-called “Chemical Marriage” process.

As depicted in numerous Alchemical texts like the Mutus Liber, the Chemical Marriage is a process in which the Sun (represented by a king), and the Moon (represented by a queen) are reunited into a single primevel being, the Royal Hermaphrodite, or the Rebis. In some texts the King and Queen copulate in a chamber filled with Mercurial water ( water collected from the morning dew), in others they commingle in a furnace.

Another product of this Royal Copulation is the Lapis, otherwise known as the Philosopher’s Stone. The Philosopher’s Stone is the device the Alchemists believed could transform base metals into gold. This fabled Stone is now familiar to hundreds of millions of people the world over thanks to the Harry Potter novels. 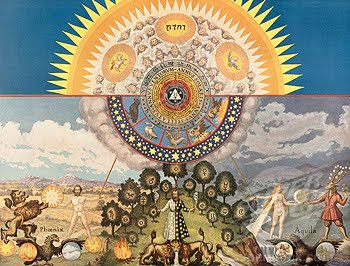 Alchemy is the most arcane of ancient sciences, and since the Alchemists deliberately obscured their teachings either in wordless books or in arcane symbols, scholars disagree as to their meaning.

Was the Chemical Wedding purely symbolic and spiritual, or was it some arcane recounting of an actual process? My vote is for the latter, but no one can say for sure. Carl Jung thought it was a metaphor for a person’s “individuation process” where the two halves of human nature- spiritual and rational- are conjouned.

However much Alchemy is scoffed at today, in many ways it was the forerunner of modern chemistry, and had a huge influence on modern medicine as well. Sir Issac Newton, arguably the most important scientific thinker in history, was obsessed with the alchemical arts. When Sir Issac wasn’t discovering the laws of gravity or inventing calculus or revolutionizing the study of Astronomy, he busied himself amassing England’s largest Alchemical library and conducting Alchemical experiments. 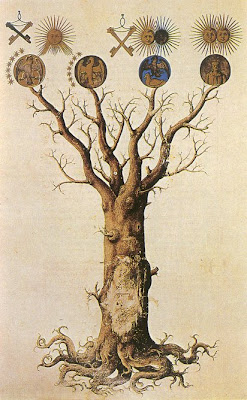 The language of Alchemy is the crux of The Fifth Element. The Alchemists believed that all matter was composed of four fundamental elements- Earth, Air, Water and Fire.

Some historians that the word “Alchemy” itself is derived from Al Khemiya which in turn is derived from Kemet (“the black land”), the name the ancient Egyptians new themselves by. ”Egypt” is a Greek name given to Kemet by the Macedonian Ptolemaic dynasty, and derives from aigis or “shield.”

The etymology of the word “Alchemy” is directly referenced by the location of the Mondoshawan temple in Egypt. And again, the use of the four elements is drawn from Alchemic arts. And the “Fifth Element” is not LeeLoo alone, but the by-product of the Coninunctio, or the Chemical Wedding between Korben and LeeLoo.

Their make-out session overseen by the priests in the Mondoshawan temple was their nuptials, and the episode in the rebirthing chamber was their royal consumation. The kings, queens and princes of the Earth are their to witness their apotheosis, which signifies the supreme status of the Alchemical arts in this ritual drama. 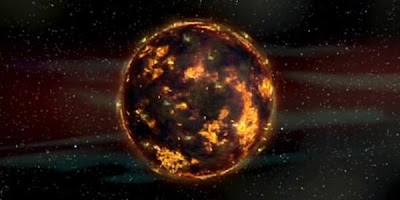 Not surprisingly, this Alchemical ritual drama is rife with Solar imagery. The big baddie, Mister Shadow in the tale is depicted as a Black Sun (or Saturn, in some traditions), a burning orb that gives no light nor heat. In other words, a spiritual force that exists only to serve its own needs, and possesses neither love nor compassion. It is pure, elemental Evil. It’s a sun that gives off light instead of shadow. It’s accomplice, Zorg, is a disciple of Evil. He believes that destruction and warfare are necessary facets of existance, and that personal enrichment is the highest good.

In the Alchemical Wedding drama of The Fifth Element, Korben is the Sun King and LeeLoo is the Moon Queen. Leeloo herself represents theprima materia of the Alchemical grail quest.

LeeLoo is reconstructed from a genetic fragment recovered from the Mondoshawan ship, which crashed on a barren and dusty moon. The moon, being traditionally untouched by man, is thereby a source of theprima materia, or the “untouched matter” which the Alchemists sought to transform into gold. The Moon also reflects the Sun, which accounts for the solar touches in LeeLoo’s outfit.

Korben is a depicted as deactivated soldier from an elite military order. Exactly which order Korben serived is no mystery to those familiar with medieval or military iconography. When we first meet Korben in his small, Spartan apartment we see has a golden trophy adorned with the Templar cross (00:18:27)

Finally, the Mondoshawan priests dress in red and gold robes, and their Egyptian origin and extraterrestrial and godly alliances links them with the Shemsu Hor, the priest kings who ruled Ancient Egypt when the Netjer, or gods, returned to the Heavens. The Shemsu Hor are traditionally believed to be the guardians of the sacred arts, not the least of which is Alchemy.