Our Interview with Michael Schilling about Shore Leave 35,

About the Shore Leave 35:

Shore Leave is an annual fan-run convention that takes place in Baltimore, MD (USA). It was founded by the Star Trek Association of Towson (STAT), which continues to run it. The first convention took place in 1979; 2011 will mark the convention’s thirty-fifth year. 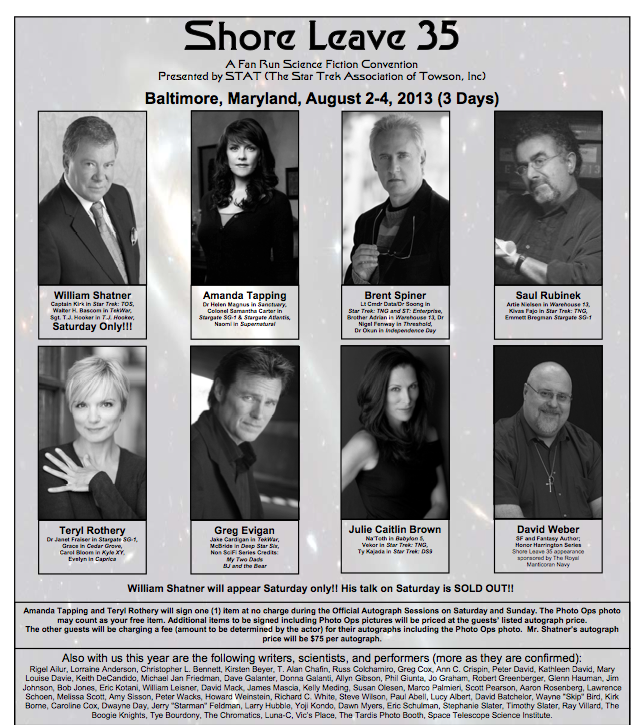 About the band Five Year Mission, who sings the song “Shore Leave” in the podcast.

(and a big thank to them for letting us use this song!)

Five Year Mission is the collaboration of five Star Trek fans who endeavor to write and record a song for each of the episodes of the original Star Trek series from the 1960s.  We love the show, and we wanted to create something that we could share with other fans and something we would have a blast doing.

“When you think ‘Star Trek band’ obviously the first thing that comes to mind is poorly recorded synthesizer music with laser beam sounds, cheesey costumes, and bad vocals, but Five Year Mission is FAR from those things.  When I came up with the concept of writing a song for every episode of Star Trek I truly had no idea how awesome of an undertaking it was going to be.  In less than a year we have jumped from a couple of guys getting our musical geek on to a well greased machine that is selling albums world wide.  We are getting requests to appear in many cities all around the world, and may have to quit our day jobs to keep up with it!  What I love about it the most is that we are totally serious about the concept.  We are not posers.  We love this project and hold it to the absolute highest standards.  The band consists of five dedicated musicians/Star Trek fans who are all veterans of the Indianapolis music scene.  And though we do have the cheesey costumes, we always strive to put on a great show for all the Trekkers of the world and all music lovers too.”
-Mike Rittenhouse

Support the mission, and of course, live long and prosper!

(The above information was taken from the bands website.)