Thank you to Kate R from www.rdanderson.com for allowing us to use this biography. 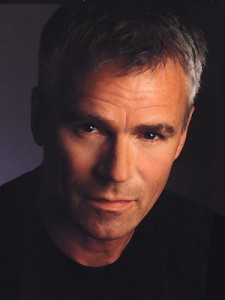 Richard Dean Anderson is probably best known as MacGyver, the clever and inventive nonviolent hero who solved problems in his own unique way for seven successful seasons on ABC. In his roles before and since, this gifted actor has continued to demonstrate his remarkable talent and versatility.

Richard was born on January 23, 1950 in Minneapolis, Minnesota. His father, Stuart Anderson, taught English, drama, and humanities at a local high school, and is an accomplished jazz bassist. His mother, Jocelyn, is an artist, talented in both painting and sculpture. Richard is the eldest of four sons. He and his brothers, Jeffrey Scott, Thomas John, and James Stuart, grew up in the Minneapolis suburb of Roseville, where Richard developed early interests in sports, the arts, music, and acting.

Like many boys growing up in Minnesota, Richard dreamed of becoming a professional hockey player. However, at the age of 16, he broke both arms, in separate accidents three weeks apart, while playing in high school hockey games. He put aside his dreams of playing professionally, though he still harbors a deep love for the sport. Richard talks of his restlessness growing up, his early desire to explore, and his adventures hitchhiking and hopping freight trains. At the age of 17, he took a 5641 mile bicycle trip from his home in Minnesota through Canada and Alaska, an experience which was sparked by his sense of adventure and discovery, but which also gave him a more centered sense of direction.

He studied drama at St. Cloud State University and at Ohio University, though he left just short of completing his degree. His travels took him briefly to New York City, and he spent some time experiencing the cultural revolution of the Haight-Ashbury district of San Francisco, before finally settling in Los Angeles. There he worked as a street mime and juggler, and as a jester-singer at a Renaissance-style 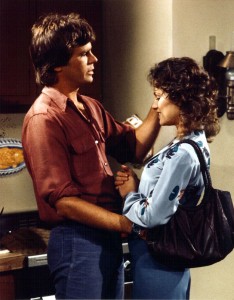 cabaret. He also worked for a time at Marineland, where he wrote, directed, and performed in the marine mammal shows. His job included holding fish in his mouth for the killer whales to leap up and snatch, and he tells of the powerful whack to the face he took while rehearsing his routine with an orca. He appeared in plays and live theater as well, including landing a role in Superman in the Bones at the Pilgrimage Theatre. During his early years he also joined his friend Carl Dante, and for a time sang and played guitar as part of Carl’s rock band under the name “Ricky Dean and Dante”.

Richard came to national attention in 1976 as Dr. Jeff Webber on the popular daytime drama General Hospital. After five years in that role, he felt it was time to move on, and he left to try his hand at prime time television. He appeared in two short-lived television series for CBS, as the eldest brother in Seven Brides for Seven Brothers in 1982, and as a hot-shot Naval pilot in Emerald Point N.A.S. in 1983, as well as numerous guest appearances in other series.

In 1985 Richard was cast in his signature role as MacGyver, on ABC. He has told the story of how he won the role. He had been called in for an audition, and asked to “cold read” an unfamiliar script. Being very nearsighted, he asked to wear his glasses for the reading, and that simple unselfconscious gesture immediately convinced the show’s producers that they had found the right man to become their unpretentious hero. MacGyver ran for seven successful years, and continues to enjoy popularity all around the world. 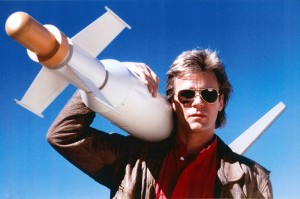 He made his TV movie debut in 1986 in Ordinary Heroes, with Valerie Bertinelli. In this remake of the 1945 movie Pride of the Marines, Richard gave a moving performance as a soldier who is blinded three days before returning home from Vietnam. In preparation for the emotional demands of the role, he studied with the late Peggy Feury before shooting began. He demonstrated his incredible talent for a variety of roles when he appeared in several movies for CBS television following the finale of MacGyver. In 1992 he starred as a disillusioned cop opposite Justine Bateman in the movie In the Eyes of a Stranger, and as a psychotic stalker pursuing Marg Helgenberger in Through the Eyes of a Killer. His chilling performance as an abusive husband opposite Susan Dey in the 1994 movie Beyond Betrayal caused Daily Varietyto remark, “…credit Richard Dean Anderson with a performance so creepy that masks of his character could be Halloween bestsellers.” In June of 1995 he explored the opposite end of the acting spectrum with a powerful and touching performance as a father grieving the loss of his young son in Past the Bleachers, for ABC.

As MacGyver came to an end, Richard and his partner, Michael Greenburg, had signed an overall deal with Paramount Pictures to develop and produce several films and series for television for their own production company, Gekko Film Corp. In their first project, Richard acted as both star and executive producer of two MacGyver movies for television, both of which were filmed in London in 1993. MacGyver: Lost Treasure of Atlantis and MacGyver: Trail to Doomsday aired in 1994 to critical acclaim. Their next project for Gekko was the 1995 TV seriesLegend for UPN. In it, Richard portrayed Ernest Pratt, a dime novelist who reluctantly takes on the role of his literary hero, Nicodemus Legend, in a lighthearted blend of western and science fiction. Once again Richard took on the role of executive producer, as well as demonstrating a considerable talent for comedy, in what he has described as his favorite role to date.

Following the premature cancellation of Legend, Richard signed an agreement with CBS television, and filmed a pilot episode for a new 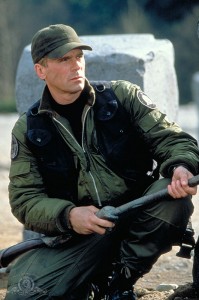 television series, Firehouse, although the series was not picked up by the network. His next appearance was as the heroic captain of a doomed airliner in the 1996 blockbuster NBC miniseries Pandora’s Clock, which received critical acclaim and was an important ratings winner for the network. He followed this success by joining with MGM/UA and Showtime television in a joint deal with Gekko Film Corp to produce and star in the new science fiction series Stargate SG-1, based on the 1994 movie. His new series began production in Vancouver in February of 1997, and debuted to outstanding ratings on Showtime on July 27, 1997.

Richard loves to travel, and he has retained his love for music and the arts. He enjoys collecting art, with his tastes running from the French Impressionists to the more modern. He continues to play the guitar, and has even tried his hand at composing, including the original piece,Eau d’Leo, which was used in the series MacGyver. He has expressed his appreciation for both classical music and jazz, as well as the country-rock guitar style of artists such as Steve Earle, and has considered Leo Kottke to be his musical idol for years. An avid sports fan, he indulges his passions for hockey, skiing, baseball, sky diving, cycling, and auto racing whenever possible. He enjoys fast cars and motorcycles, and owns, among others, both a 1000cc Harley-Davidson Sportster and a black Acura NSX. He has participated in the Toyota Celebrity Long Beach Grand Prix twice, as well as various other racing events around the country. He has a passion for skiing, and can often be found on the ski slopes, both in his off time, and for numerous celebrity events for charity. As a huge fan of ice hockey, he is one of the founders of the Celebrity All Star Hockey team, a collection of hockey enthusiasts from the sports and entertainment worlds, who play in NHL cities throughout the country for charity. In 1988 and 1992, Richard was chosen to be the honorary captain of Team USA, the United States Olympic hockey team, and he takes pride in his opportunities to become an ambassador for the sport.

Richard actively supports many charities and organizations. For many years he has been on the Board of Trustees for the Challengers Boys and Girls Club, a youth organization founded in 1968 with the help of MacGyver executive producer Stephen Downing, and upon which the Challenger Center of the TV series was based. He is the recipient of the 1995 Celebrity Award from the Make-A-Wish Foundation, and his commitment to the Foundation, an organization that grants wishes to terminally ill children, has included many opportunities for his young fans to visit the set. He has supported the Multiple Sclerosis Society, and has done several public service announcements for causes he strongly supports, including the Center for the Prevention of Handgun Violence, and Project Literacy US. For many years he has given his support to the Special Olympics, and was one of the key speakers at the opening ceremonies for the Special Olympics games in 1991. In recent years, Richard’s focus has been particularly drawn to environmental issues. He has been named to the board of directors of the Sea Shepherd Conservation Society, and he has partnered with members of Earth River Expeditions to produce the “River Project,” a series of documentaries about the great rivers of the world.

Richard Dean Anderson is 6 feet, 2 inches tall, with naturally dark brown hair and eyes. He has a deep love of dogs, whom he refers to as his “favorite people,” and his most constant companion for many years had been Whiskey, the Australian shepherd he had raised from a puppy, and a permanent fixture on the MacGyver set, who passed away in 1989 at the age of 13. In 1996, Richard found himself a new companion in ZoÃ«, yet another Australian shepherd puppy and “best friend.”

Richard has never married, and although he prefers to keep his private life private, he has been linked in the past with several high-profile women, including Deidre Hall, Sela Ward, Marlee Matlin, Katarina Witt, Teri Hatcher, and Lara Flynn Boyle. In 1996, Richard met Apryl Prose, and together they celebrated the birth of their first child, a daughter, on August 2, 1998. Wylie Quinn Annarose Anderson entered the world at 7 lbs. 11 oz. Richard speaks with great enthusiasm about his new adventure of fatherhood, and takes great pride in his reputation as a doting dad. Richard lives both in Vancouver and near Los Angeles, as well as owning a cabin in northern Minnesota.

Throughout his career, Richard has made a point of selecting roles that would allow him to stretch and demonstrate the range of his remarkable skill. With additional projects in development from Gekko Film Corp, Richard’s fans can look forward to many more appearances from this accomplished and versatile actor.

Thanks to Kate R. for compiling this biography.  You can find the original plus many more photos at: www.rdanderson.com.