SciFi Diner Podcast Ep. 250 – Our Interview with Timothy Zahn (Star Wars) and Our Discussion on the Infantilism of Corporate Science Fiction

SciFi Diner Podcast Ep. 250 – Our Interview with Timothy Zahn (Star Wars) and Our Discussion on the Infantilism of Corporate Science Fiction

On this podcast, we talk about the Squee Fan Girl Project which you can find out about here. We also discuss Hot Topics acquisition of ThinkGeek.  We wind up our discussion with whether or not infantilism has struck pop Science Fiction, a discussion based on an article by Simon Pegg.  We share our short interview with Timothy Zahn and end with the top five Simon Pegg movies. Please excuse the audio. 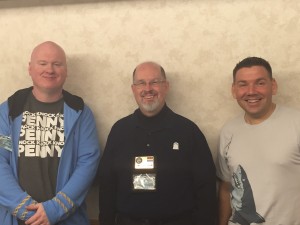 Zahn’s novella Cascade Point won the 1984 Hugo Award. He is the author of the Blackcollar trilogy and the Cobra series (seven novels so far), ten Star Wars Expanded Universe novels, including seven novels featuring Grand Admiral Thrawn: the Thrawn Trilogy, the Hand of Thrawn duology, Outbound Flight, and Choices of One.

LucasFilm at times referred to some of the more detailed Star Wars: The Roleplaying Game supplements from West End Games, and when Timothy Zahn started work on a new trilogy of Star Wars books, boxes of West End sourcebooks were delivered to him. At the time, Zahn was writing what would become known as the “Thrawn Trilogy”, the first book of which was Heir to the Empire (1991). In turn, West End released sourcebooks for Zahn’s three novels from 1992-1994.

The Thrawn trilogy marked a revival in the fortunes of the Star Wars franchise, bringing it widespread attention for the first time in years; all three Thrawn-trilogy novels made the New York Times best-seller lists,[3] and set the stage and tone for most of the franchise’s Expanded-Universe content. Zahn also wrote the young adult Dragonback series and the popular Conquerors’ Trilogy.