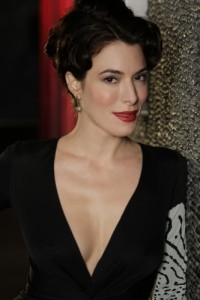 Jaime Murray (born 21 July 1976) is an English actress, known for playing Stacie Monroe in the BBC series Hustle and Lila West in the Showtime series Dexter. She is also known for her recurring roles as Gaia in Starz’ Spartacus: Gods of the Arena, as Olivia Charles in The CW’s Ringer and as Helena G. Wells in Warehouse 13. Murray stars as Stahma Tarr in the Syfy series Defiance.

Murray was born in London, England, to Elaine and English actor Billy Murray. She was named after Lindsay Wagner’s character Jaime Sommers in the 1970s television series The Bionic Woman. Just before taking her A Levels, Murray was diagnosed with dyslexia. She briefly studied philosophy and psychology at the London School of Economics, but dropped out to train at the Drama Centre London, graduating in 2000.

Murray’s first taste of stardom was miming the lyrics in the 1996 original video of Stretch & Vern’s dance track “I’m Alive”. Some of her early television appearances included minor guest roles in BBC One’s Casualty, The Bill, Love Soup, and ShakespeaRe-Told: The Taming of the Shrew.

Murray starred as Stacie Monroe in Hustle from series 1 until series 4. In one episode of Hustle, Murray so impressed her co-star Robert Vaughn with her modeling of a Wonder Woman costume that, according to several online sources, he showed it to studio executives in Hollywood; on the strength of this, Murray was invited to audition for the part of Wonder Woman in the upcoming Wonder Woman movie. Later, Murray reprised her role as Stacie Monroe in Hustle Series 8

Relocating to Los Angeles, California, Murray starred in Dexter as Lila Tourney, Dexter Morgan’s Narcotics Anonymous sponsor and the main antagonist in Season 2. Dexter spends one night in a hotel with Lila without any sexual contact just a brief kiss, leading to his breakup with his girlfriend Rita Bennett, but he soon realizes that Lila is in fact a sociopath who hangs out in support groups in an attempt to vicariously experience emotions in a safe environment by closely observing them in recovering addicts. She immediately sees through Dexter’s “mask” and becomes obsessed with him, believing him to be her soulmate.

In mid-2008, Murray joined the cast of The CW’s Valentine playing the lead character, Grace Valentine. The show began airing in October 2008, but was cancelled by the end of the month.

Murray was cast in another CW show, The Beautiful Life: TBL, as a wardrobe stylist, but the show was canceled before she was able to appear.

Murray finished shooting Possessions in 2010, and is currently shooting The Rapture. She starred in the 2010 horror film Devil’s Playground, directed by Mark McQueen, and then appeared as Helena G. Wells on the Syfy series Warehouse 13. Murray’s portrayal of Helena G. Wells received critical praise. Her portrayal was described as “saucy”, “superb”, as able to “anchor a series”, and “endlessly fascinating”. Her absence as the villainess in the season 3 Christmas episode, “The Greatest Gift”, was bemoaned with the lamentation “she would have done it better”. Murray was nominated for a 2012 Portal Award for her portrayal of Helena G. Wells on Warehouse 13.

Murray also made a guest appearance on the Fox series The Finder, where she played a drug coordinator. Murray starred in the Starz miniseries Spartacus: Gods of the Arena, as Gaia, a longtime friend of Lucretia. Murray made an appearance on the Partially Examined Life philosophy podcast, playing a part in Sartre’s “No Exit”, alongside Lucy Lawless, Mark Linsenmayer and Wes Alwan.

She starred as Stahma Tarr in the Syfy series Defiance, which premiered on 15 April 2013.