Please call the listener line at 1(260) 577-2428, Email us at scifidinerpodcast@gmail.com or visit us on Twitter @scifidiner. Facebook Fan Page. And check out our YouTube channel. We are apart of the Chronic Rift Network of podcasts. 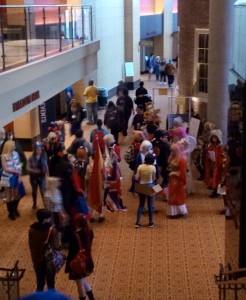 Over the years the Sci-fi Diner Podcasts has visited numerous conventions: Balticon, Shore Leave Con, Far Point Con, and even at New York Comicon. Most of these conventions have been around for a long time and are well run. This year we had the opportunity to travel to Zenkaikon, our very first Anime convention. It was one of the best, well-run cons that I have ever experienced.

When one thinks of Lancaster Pennsylvania, typically the first thing that comes to mind is the Amish homage. But when we arrived at the Lancaster Convention Center in downtown Lancaster City, Pennsylvania, this scenario was anything but Amish. The convention floor was littered with all sorts of cosplay. We talked to countless Cosplayers that had spent hours developing the perfect cosplay for this event. It was awesome. In fact, I might venture to say that arriving to this convention without being in some sort of cosplay actually makes one the minority. Not that it mattered a whole lot. At this family friendly Con, everyone was welcome. T and I  chose not to cosplay for this convention. Next year might be a different story.

After registering, we explored all four floors of the convention center to get a feel for what each level of Zenkaikon had to offer. The topmost level was reserved for people who were LARPing (Live Action Role Playing). The next level down had Anime  karaoke, Starship Artemis, a few rooms for panels, and a video gaming room. The second level also contained a gaming room, this one focused on board games, Magic the Gathering and Pokemon.  This floor also had some additonal panels and a two places ypou could sit and watch anime if you wanted. The ground floor contained the dealer’s room and the main hall where the guests of honor spoke. This year, Zenkaikon’s guests of honor were Richard Epcar, Ellyn Stern, Dante Basco, and Vic Mignogna just to name a few. 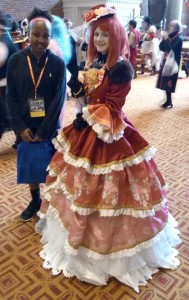 We started our day in the Anime karaoke room. I am used to hearing karaoke sung in a more bar-like setting where people who are inebriated belt out tunes of their favorite songs, typically singing them poorly. But this was not the case.  It was more like Anime American Idol where contestants sang J-pop songs and Anime songs. And they weren’t singing them poorly.   and also had the dealers roomWhat ever quest throughout the day was defined in a Chico keychain which never located. Never the last hunt was fine. We set up our interview or interview at been set up for 11 o’clock with Richard Apgar and Eileen Stern. So that’s how we got settled in weed about a half an hour to explore the dealers roomEnds also spent about a half an hour listening to karaoke. 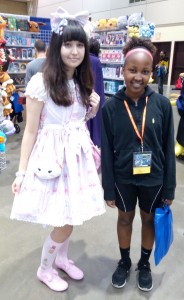 The next stop for us was the dealers room.  T decided to start a Bleach keychain collection.  What she really wanted was an Ichigo keychain, but no vendors were selling them.  Still, she ended up with four keychains from the show.  The dealer’s room had literally anything anime you could want.  Books, movies, games, cosplay outfits, artwork, food, and swords. 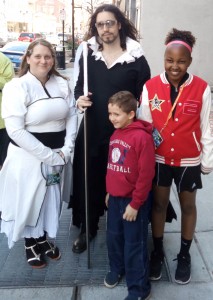 to interview Richard Epcar and Ellyn Stern and placed them in a second floor private room to conduct the interview.  It was nicely done and yet still allowed some con  noise to filter through giving our interview an authentic feel.

After our interview, we went and listened toVoice Actor Panel featuring: Dante Basco, Richard Epcar, Vic Mignogna and Ellyn Stern. It was fun hearing them recite lines of Star Wars: A New Hope in Shakespearean language and fun to hear the voice of Prince Zuko having an argument with Edward Elric.

Since we only live about 15 minutes, my wife and 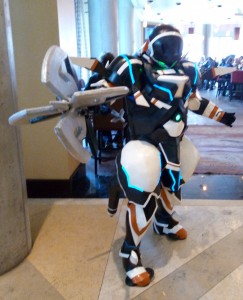 son joined up for a brief lunch.  Downtown Lancaster has tons of places to eat including Asian fusion, Caribbean, a slew of pubs, and more standard fare like Isaacs and other sandwich shops. We chose to eat at a Caribbean place that we’ve eaten that a few times before. On the way back to the convention, we ran into Ichigo, or I should say a cosplayer dressed as Ichigo. My daughter was ecstatic.

Back at the convention, we sat in on Vic Mignogna’s Question and Answer panel, spent some more time in the dealers room, and also just spent time enjoying looking at all the cosplay. 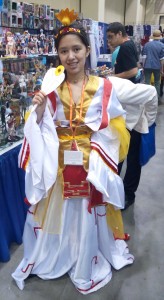 Zenkaikon ranks a 10 out of 10 as convention. It is clear that in the 10 years of running this convention, they have learned a lot about running such an event. It is an event I hope to return to next year.