Tonight’s Menu: We discuss the fall TV line up, what we are watching and not watching, and share our interview with Michael Trucco of Battlestar Galactica fame. 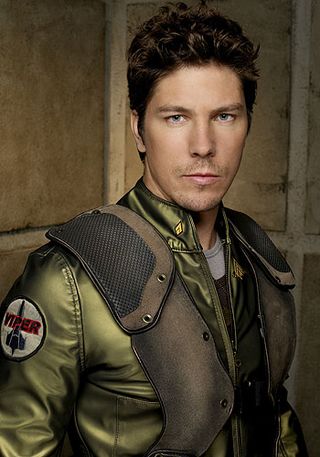 Edward Michael Trucco (born June 22, 1970) is an American actor known for his role as Samuel T. Anders on the reimagined Battlestar Galactica and his recurring role as Nick Podarutti in How I Met Your Mother.

A native of San Mateo, California, Michael Trucco attended Junipero Serra High School. He is the son of a police officer, and was once interested in becoming one himself until college, when he was attracted to theatrical performance. He took a theatre course for non-majors while he was studying Criminal Justice, but he did so well that he was asked to consider changing majors. He changed majors and completed his bachelor’s degree in Theatre Arts at Santa Clara University.

Trucco became active in television in the late 1990s with appearances in episodes of Touched by an Angel, Silk Stalkings, Beverly Hills, 90210, Dr. Quinn: Medicine Woman, and Pensacola: Wings of Gold among others. He continued appearing in shows of similar genres like CSI, Heartbeart, Strong Medicine, CSI: Miami, and others into the 2000s. He played Cooper Lee in six episodes of One Tree Hill from 2005 to 2006.

In 2002, Trucco starred in Wishmaster: The Prophecy Fulfilled. In 2005, he joined the drama Battlestar Galactica in the role of Samuel T. Anders. In 2008, he guest-starred on NBC’s Law & Order: Special Victims Unit and The Big Bang Theory. In 2010, he guest-starred on ABC’s series Castle as Detective Tom Demming. In 2010, Trucco was cast as a series regular in the USA Network series Fairly Legal.

Trucco guest starred in a season 6 episode of How I Met Your Mother in 2011, and had a recurring role in the show’s eighth season. He played the recurring character Nate Ryan in the second season of Revenge.

Trucco is also the lead guitarist of the band Simpleworld.