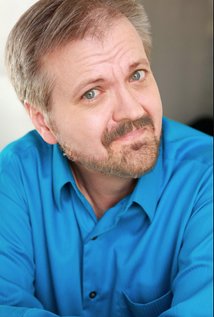 Larry Nemecek (born January 18, 1959) is an American Star Trek author, actor, editor, archivist, consultant, interviewer and producer, first widely known thanks to his classic best-seller “Star Trek: The Next Generation Companion” from Pocket Books. He has portrayed Dr. McCoy in the Star Trek Continues web series episodes “Pilgrim of Eternity” and “Lolani” and remains as the series’ Creative Consultant.

Nemecek has recently launched the pioneering Portal 47 monthly deep-dive features for Star Trek fans, and is filming a documentary, “The Con of Wrath,” about the infamous true-life Ultimate Fantasy arena show and convention in 1982 Houston — known as perhaps Star Trek’s “most glorious failure.” Under the Trekland banner, he hosts the online Trek interview series series “Switching to Visual”, and has produced five annual editions in the digitally remastered “On Speaker” archival series, themed from his original interviews with producers and crew during the years of the modern Trek TV era. He is married to onetime script coordinator Janet Nemecek.

Nemecek’s more recent franchise work is the non-fiction “Star Trek: Stellar Cartography” guidebook and map set from 47North (Amazon). He also wrote the chapter openers and other research for Star Trek: Star Charts – a 2003 Pocket Books reunion of sorts with onetime colleague Geoffrey Mandel after they had earlier joined on the 1980 “Star Trek Maps” (Bantam), and self-published material just prior. Along with two updates of the TNG “Companion” in 1995 and in 2003, his text commentary also appeared in the CD version.

Since 1986, Nemecek has conducted over 500 archival interviews of Star Trek writers, designers, crew and actors, most of them multiple or annual updates over the years and unpublished. Remastered segments are now being digitally produced under his own brand as Trekland: On Speaker. He has appeared as a documentary guest on titles such as Trek Nation, The Green Girl, The Captains of The Final Frontier and numerous installments of the TNG and Enterprise Blu-ray collection documentaries.

In December 1994, after moving to Los Angeles from his native Oklahoma, Nemecek and his wife Janet pitched and sold a story, “Reflections,” for the yet-to-air series Star Trek: Voyager. It went unused for six years before being updated and written as “Prophecy,” an episode for Star Trek: Voyager in its final season in 2001.

Nemecek co-wrote The Making of Star Trek: First Contact, published by Titan Books in the UK from material he, Ian Spelling and Lou Anders wrote for Titan’s magazine specials on the film. He authored the original 1998 museum artifact placards and the 2002 timeline update in the museum area of Star Trek: The Experience, and was a consultant there as well as on such projects as the Star Trek: Federation Science European tour and the Star Trek World Tour guidebooks and image references. He has been a guest at dozens of Star Trek and sci-fi/comic conventions in the U.S. and eight other countries, and also spoken at science museums here and in Germany on Star Trek stars vs. real stars.

From 1998 until 2005, after publication of the TNG Companion, Nemecek served as managing editor of Star Trek Communicator, overseeing the planning, writers, content and look of the licensed magazine of the Official Star Trek Fan Club, sold on newsstands. He has been a regular columnist in Star Trek Magazine since 1997, and contributed dozens of articles to Star Trek Fact Files, for which he worked all six years as Los Angeles photo editor and consultant. The topics researched and obscure references and sources tracked fueled the work of the UK-based Fact Files, later seen in the US as Star Trek: The Magazine.

He was also the sole Star Trek-affiliated contributor to Star Trek: Best Episode Collection, a Fact Files/DVD partwork project for Japan, and continues his two columns for Star Trek Magazine.

For many years, Nemecek was a contributor and producer on the official Star Trek website. In 1996, he was its first-ever chat guest, its managing editor one day a week, and from 1996-99 wrote much of its early database as a consultant. In December 2007, however, on his latter-day stint with the site, he and the entire StarTrek.com production team were laid off by CBS Interactive, the result of restructuring at the company.[5]

Outside the Star Trek realm, Nemecek holds a theatre and communications BA from East Central University in Ada, OK, and an MA in theatre/directing from the University of Kansas. He spent over 10 years in weekly and daily print journalism as a beat reporter, wire editor and finally entertainment editor of The Norman Transcript, sharing with colleagues two first-place Associated Press state news awards in spot news and public service reporting. A Norman native, graduate of Noble High School in adjacent Noble, OK, and a lifelong fan of fellow Oklahoman and humorist-turned-actor Will Rogers, he has been a docent at the Will Rogers State Historic Park in greater Los Angeles since 2002. As a Star Trek fan in his home state since his teens, he worked committee on the non-profit Soonercon charity sci-fi fan convention after graduate school, and founded the Trek-focused non-profit ThunderCon media fan convention in 1991.

In 1990, the shuttle Nenebek, featured in the Star Trek: The Next Generation episode “Final Mission,” was named in his honor by Jeri Taylor. She had not yet met him but, like other writing staffers, had his fanzine concordances on her desk. She did not think to tell him the story until 1998.

In 2002, Nemecek was interviewed for the bonus features (Star Trek Moments and Memories) on the original Season 7 DVD for Star Trek: The Next Generation. He spoke again in interviews for the new 20th anniversary DVD set for TNG in 2007, serving as Special Consultant on the overall project, and appeared again in several editions of new documentary pieces for the 2012-16 CBS Blu-ray releases of both TNG and Enterprise, and for the new Kirk-era motion picture sets. He also teamed up with DS9 show runner Ira Steven Behr on a commentary track for the Blu-ray edition of Star Trek VI: The Undiscovered Country in 2008, and led round-table discussions on each of the four TNG films for their Blu-ray debut release that same year.

In 2005, Nemecek appeared with other cameo guests and crew in “These Are the Voyages…”, the final episode of Star Trek: Enterprise. His costume was a reuse of Avery Brooks’ suit from Star Trek: Deep Space Nine episode “Far Beyond the Stars”. Nemecek recounted his experience filming the episode in his “Endgame” column in Star Trek Magazine issue 124.

As an actor, Nemecek also portrayed Dr. McCoy in the “Operation: Annihilate!” webisode of The Red Shirt Diaries. Roles related to Star Trek also included two episodes of the fan film Star Trek: New Voyages, in 2004 and 2006, and in the “lost” 2005/2011 vignette No-Win Scenario as a Tellarite, Grolst.