Tonight’s Menu: We share our Shore Leave interview with Luciana Carro from Battlestar Galactica, Helix, and Supernatural; we discuss Gifted and Inhumans and why one is thriving and the other is not. We end with our top five worst moments from Inhumans. 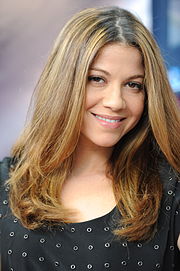 Luciana Carro (born 23 March 1981) is a Canadian actress best known for her appearances on the television series Battlestar Galactica, Caprica, and Falling Skies and in movies such as Two for the Money and Dr. Dolittle 3.

Carro was born in Toronto, Ontario, Canada. She was encouraged to act by her parents as a way of overcoming her shyness. With the encouragement of her high school drama teacher Gerry Campbell (father of Neve Campbell), she attended theater school.

Carro began her career in TV series such as The Chris Isaak Show, Smallville and The L Word. These led to her getting a part in the reimagined Battlestar Galactica TV series as Louanne “Kat” Katraine, a trainee Viper pilot who became an ace flyer and a regular part on the series.

Her performance in Galactica was noted by film producers, and she subsequently starred in Two for the Money (alongside Al Pacino) and Dr. Dolittle 3. She was also cast for the recurring role of Stephanie Meyer on Everwood. She had a recurring role as Priyah Magnus on the now-canceled TV series Caprica and recently appeared as Crazy Lee in the TV series Falling Skies. She also played the character of Anana on the Syfy series Helix.