Tonight’s Menu: We chat with Larry Nemecek (Dr. Star Trek) about Star Trek: The Motion Picture.  Larry Nemecek is the formost expert in all things Trek-related and runs The Trek Files, Portal 47, Con of Wrath, and The Star Trek The Next generation Companion.

Author, interviewer, host, archivist, producer, voiceover, actor… and fan: LARRY NEMECEK has a background in news and theatre, but it is “Trekland” where he’s worked for nearly 25 years. A renowned Star Trek authority, Larry is the author of the bestselling classic Star Trek The Next Generation Companion, and a regular convention guest worldwide, often referred to as “Dr. Trek.”

ON STAGE / ON CAMERA

Larry is a regular host and guest at conventions around the world, and a favorite on podcasts, too. He can be heard as a Star Trek authority on official DVD/Blu-ray features, in documentaries, and on TV and radio whenever Trek news breaks. Thousands of fans also know him as the original Dr. McCoy in the award-winning Internet hit Star Trek Continues. A trained journalist, Larry went from daily news to best-selling author of the classic Star Trek: The Next Generation Companion, and the Star Trek: Stellar Cartography map/book set. He served as managing editor of the fan-favorite official magazine Star Trek Communicator, was a senior staffer for the entire original Fact Files run, and was an editor/producer for the original startrek.com. His regular column for Star Trek Magazine celebrated both its 100th entry and 20th anniversary in November 2017. Larry continues to produce video interviews with Trek creatives pros and fans for his “Switching to Visual” online series. His “On Speaker” audio series draws from hundreds of hours of long-form archival interviews since the late ‘80, curated and digitally remastered onto CD. As a photographer, Larry has also captured decades of original images of Star Trek moments both pro and fan, a close witness especially during the TV revival boom of the later Next Generation era through Enterprise. The Con of Wrath is Larry’s first film project, a documentary preserving the tale of “Star Trek’s most glorious failure”: the 1982 Ultimate Fantasy arena show debacle. His consulting credits include the storied Star Trek: The Experience in Las Vegas and other Star Trek exhibitions and science tours. He’s now creative consultant for Star Trek Continues online, and speaks for the non-profit Enterprise in Space global education/orbiter program. 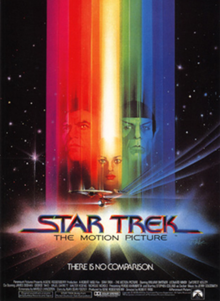 Star Trek: The Motion Picture is a 1979 American science fiction film directed by Robert Wise and based on the television series of the same name created by Gene Roddenberry, who also served as its producer. It is the first installment in the Star Trek film series, and stars the cast of the original television series. The film is set in the twenty-third century, when a mysterious and immensely powerful alien cloud known as V’Ger approaches Earth, destroying everything in its path. Admiral James T. Kirk (William Shatner) assumes command of the recently refitted Starship USS Enterprise, to lead it on a mission to save the planet and determine V‘Ger‘s origins.

When the original television series was canceled in 1969, Star Trek creator Gene Roddenberry lobbied Paramount Pictures to continue the franchise through a feature film. The success of the series in syndication convinced the studio to begin work on the film beginning in 1975. A series of writers attempted to craft a “suitably epic” script, but the attempts did not satisfy Paramount, so the studio scrapped the project in 1977. Paramount instead planned on returning the franchise to its roots, with a new television series titled Star Trek: Phase II. The box office success of Close Encounters of the Third Kind, however, convinced Paramount that science fiction films other than Star Wars could do well at the box office, so the studio canceled production of Phase II and resumed its attempts at making a Star Trek film. In 1978, Paramount assembled the largest press conference held at the studio since the 1950s, to announce that two-time Academy Award-winning director Robert Wise would direct a $15 million budget film adaptation of the original television series. With the cancellation of Phase II, writers rushed to adapt its planned pilot episode, “In Thy Image”, into a film script. Constant revisions to the story and the shooting script continued to the extent of hourly script updates on shooting dates. The Enterprise was modified inside and out; costume designer Robert Fletcher provided new uniforms, and production designer Harold Michelson fabricated new sets. Jerry Goldsmith composed the film’s score, beginning an association with Star Trek that would continue until 2002. When the original contractors for the optical effects proved unable to complete their tasks in time, effects supervisor Douglas Trumbull was given carte blanche to meet the film’s December 1979 release date. The film came together only days before the premiere; Wise took the just-completed film to its Washington, D.C., opening, but always felt that the final theatrical version was a rough cut of the film that he had wanted to make.

Released in North America on December 7, 1979, Star Trek: The Motion Picture received mixed reviews from critics, many of whom faulted the film for its lack of action scenes and over-reliance on special effects. Its final production cost ballooned to approximately $46 million, and earned $139 million at the worldwide box office, falling short of studio expectations, but enough for Paramount to propose a less expensive sequel. Roddenberry was forced out of creative control for production of the film’s 1982 sequel, Star Trek II: The Wrath of Khan. In 2001, Wise oversaw a director’s cut for a special DVD release of the film, with remastered audio, tightened and added scenes, and new computer-generated effects.