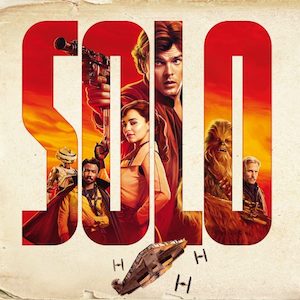 Special thanks to Mike Crate for his promotion on Twitter.

Our Solo: A Star War’s Story

In this second ‘Star Wars’ stand-alone, spin-off film, it opens with the traditional “A long time ago, in a galaxy far, far away…..”

Across the known galaxy during the early years of the First Galactic Empire, organized crime syndicates are running rampant due to rampant lawlessness on the mid and outer rim worlds since the fall of the Galactic Republic, forcing others to fight for survival. On the industrial ship-building planet Corellia, Lady Proxima (voice of Linda Hunt), leader of the White Worms gang, is after a hyperfuel known as coaxium. Meanwhile, one young man seeks a way out of Corellia for good.

That man is Han (Alden Ehrenreich). After getting his hands on some coaxium, he meets with his girlfriend Qi’ra (Emilia Clarke) as they plan to escape. They are found by some of Proxima’s minions and are taken to her, where she demands the coaxium. Han takes out a rock that he pretends is a detonator and throws it at the walls to bring in sunlight, which the worms are sensitive to. Han and Qi’ra run and evade the worms as they chase after them, managing to lose them after Han gets them through a tight spot in the wall with his cruiser, but they end up stuck and have to keep running on foot.

At the nearby spaceport, Han and Qi’ra evade Imperial storm trooper guards and bring the coaxium to a female Imperial officer as a bribe to help them escape. They nearly make it to freedom until they are spotted by the worms again. Han is able to make it out, but Qi’ra is captured. Han promises to find a way to get her out. Now on his own, Han decides to enlist as a pilot for the Empire. He speaks to a recruitment officer, and he asks Han his full name. When he can’t give him one, and when the officer sees he is alone and has no family, he gives him a name and dubs him… HAN SOLO.

Han is fighting on the planet Mimban as an Imperial infantryman since he got kicked out of the Imperial Flight Academy for insubordination. Most of the fighters on his side get themselves killed, but Han manages to find three thieves posing as fighters – Tobias Beckett (Woody Harrleson), his girlfriend Val (Thandie Newton), and the alien Rio Durant (voice of Jon Favreau). Fed up with constant conflicts, Han wants to join them after telling them he’s a good pilot, but Beckett refuses to let him join, even after Han tries to blackmail them. Han is taken by guards and thrown into a pit to be fed to a beast. The beast turns out to be none other than the Wookie Chewbacca (Joonas Suotamo). He attacks Han at first, but after Han reveals he can speak Chewie’s language, they decide to work together to break out. Han uses Chewie to break the beam that’s keeping them held together, which causes the ceiling to collapse, along with two guards hoping for Chewie to eat Han. The two escape and see Beckett, Val, and Rio leaving on a ship, hoping to have caught a ride. Rio manages to convince Beckett to bring the two on-board since Chewie could work well as extra muscle.

The crew rests for the night on the snow-covered planet Vandor before their upcoming job. As they sit around a campfire, Val figures that Han is doing what he is doing for a girl. Beckett tells Han that they are trying to steal a ton of coaxium from a train for the people they work for.

The next day, the crew spots the train and they go in for the heist. They find the coaxium, but they are attacked by a gang of Cloud Riders. The crew fights them off, but Rio is shot as he flies the ship overhead, forcing Han to go and pilot the ship. Rio then succumbs to his wounds. Val is at the end of the tracks just over a cliff where the Cloud Riders ambush her. To ensure they don’t get the others or the coaxium, she blows herself up with the tracks, causing the train to plummet to the ground. Han also ends up dropping the coaxium, causing a huge explosion.

Beckett leaves memorials for Rio and Val, and he punches Han in the face for ruining the mission as they were supposed to deliver the coaxium to a criminal named Dryden Vos (Paul Bettany), leader of the Crimson Dawn syndicate. Without the coaxium, Beckett fears Dryden will kill him. Han offers himself and Chewie to help Beckett find another stash of coaxium. Beckett reluctantly agrees to let Han and Chewie come along.

The three travel to Dryden’s ship docked nearby where Han reunites with Qi’ra, who has been working for Dryden for the last couple of years. After Dryden kills a man in his private room, he steps outside to speak to Beckett and meet Han and Chewie. After discussing what happened with the coaxium, Han suggests that they take a whole stash of coaxium from the mines on the planet Kessel. Dryden has Qi’ra join them.

In order to get a ship to head to Kessel, Qi’ra brings the three to meet the one and only charming smuggler Lando Calrissian (Donald Glover) as he is playing a card game of Sabaac against other aliens. Han challenges Lando to a game, where the winner gets the other’s ship. Han appears to almost win, until Lando uses a card hidden in his sleeve to win. Still, Lando joins Han and the others on their mission for the potential profits that would follow. They stop to get Lando’s droid friend, L3-37 (voice of Phoebe Waller-Bridge), who is watching a fight between other droids and is upset to see that they are used like this. Lando brings them to his ship, the Millennium Falcon, and they take off for the mining planet of Kessel.

The team arrives on Kessel and heads toward the mines. L3 initiates a riot by freeing captive droids, which allows the others to find the coaxium and take it. At the same time, Chewie spots imprisoned Wookies, and Han allows him to go in and free them. An all-out battle begins as the team tries to escape, only to get shot at by the creatures. L3 gets blasted, and Lando runs in to save her, only for her lower half to come off, and he gets injured trying to take her back to the Falcon. The team gets the coaxium on-board and they fly away, where L3 dies in Lando’s arms. As the team flies out, they are found by an Imperial star destroyer blockade that sends out TIE fighters to attack. With Lando injured, Han must pilot the Falcon to evade the TIE fighters and make it through the Maw, a cluster of black holes. They are found by an enormous space monster that tries to devour them. Han must then do a “Kessel Run”, but Lando points out nobody can do it in less than 20 parsecs. Using a piece of L3’s machinery to navigate the ship, they find themselves being sucked toward a black hole, which the space monster falls victim to as it gets ripped apart. Han then has Beckett use a small dose of coaxium to boost the Falcon out of there. It works and they fly out, and…. Han is able to brag that he made the Kessel Run in 12 parsecs.

The team is set to meet with Dryden on the planet Savareen. After they arrive on Savareen, Lando takes the Falcon and leaves. The group are soon found by the Cloud Riders, whom Beckett thinks are a bunch of marauders, until their leader, a teenage girl named Enfys Nest (Erin Kellyman), reveals herself and says they only want to keep the coaxium out of Crimson Dawn’s hands.

Han, Qi’ra, and Chewie bring the coaxium to Dryden who’s ship lands nearby. When he sees a sample, he says that it is fake. It turns out Beckett was his inside man, and he told Dryden that Han had been planning to sell the coaxium to the Cloud Riders. However, Han reveals he took a page out of Beckett’s book and anticipated that Beckett would betray them. The coaxium in the room is real, and the Cloud Riders have nothing. Beckett takes Chewie hostage, along with the coaxium. Dryden fights Han and Qi’ra, ending with Qi’ra overpowering Dryden and stabbing him through the heart with his own blade. Qi’ra tells Han to go after the coaxium and to save Chewie, and she will join them soon.

Han catches up to Beckett. Beckett attempts to draw his gun, but HAN SHOOTS FIRST and kills Beckett. Meanwhile, Qi’ra contacts her true boss… DARTH MAUL (Ray Park). She tells him of the mission’s failure, and he assigns her to Dryden’s former position. She leaves on Dryden’s ship, passing over Han and Chewie. She looks over to him, and he looks back.

Han gives the coaxium to Enfys and her team. She offers him a chance to join them, but he declines. Enfys leaves Han and Chewie with a sample of coaxium for themselves.

Han goes back to find Lando and challenge him to another game of Sabaac, only this time, he manages to swipe Lando’s card off of him before he can use it. Han wins fair and square, and he gets the Falcon. Along with Chewie, they decide to head to Tatooine after Beckett had mentioned of a gangster (Jabba The Hutt) putting together a crew for another mission. Han then puts the Falcon into hyperspace as they take off.