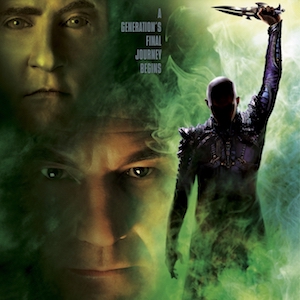 Tonight’s Menu: On this rewind, our discussion of Star Trek: Nemesis explores the phycological aspect of nature versus nurture and whether this alleviates Shinzon of responsibility, reinterpreting the mind-rape scene of Deanna Troi in light of the “me too” movement, and other struggles we had with the film.  We also some hilarious and favorite moments from the Farpoint 2019 Con.

On Romulus, members of the Romulan Imperial Senate debate whether to accept the terms of peace and alliance with the Reman rebel leader Shinzon. The Remans are a slave race of the Romulan Empire, used as miners and as cannon fodder. A faction of the military is in support of Shinzon, but the Praetor and Senate are opposed to an alliance. After rejecting the motion, the Praetor and remaining senators are disintegrated by a device left in the room by a military-aligned senator.

Meanwhile, the crew of the USS Enterprise prepares to bid farewell to first officer Commander William Riker and Counselor Deanna Troi, who are being married on Betazed. En route, they discover a positronic energy reading on a planet in the Kolaran system near the Romulan Neutral Zone. Captain Jean-Luc Picard, Lieutenant Commander Worf, and Lieutenant Commander Data land on Kolarus III and discover the remnants of an android resembling Data. When the android is reassembled it introduces itself as B-4. The crew deduces it to be a less advanced, early version of Data.

Vice Admiral Kathryn Janeway contacts Picard and orders the Enterprise on a diplomatic mission to nearby Romulus. Janeway explains that the Romulan Empire has been taken over in a military coup by Shinzon, who says he wants peace with the Federation and to bring freedom to Remus. On arrival, they learn Shinzon is a clone of Picard, secretly created by the Romulans to plant a high-ranking spy into the Federation. The project was abandoned when Shinzon was still a child and he was left on Remus to die as a slave. After many years, Shinzon became a leader of the Remans, and constructed his heavily armed flagship, the Scimitar. Initially, diplomatic efforts go well, but the Enterprise crew discover that the Scimitar is producing low levels of thalaron radiation, which is what had been used to kill the Imperial Senate and is deadly to nearly all life forms. There are also unexpected attempts to communicate with the Enterprise computers, and Shinzon himself violates Troi’s mind through the telepathy of his Reman viceroy.

Dr. Crusher discovers that Shinzon is aging rapidly because of the process used to clone him, and the only possible means to stop it is a transfusion of Picard’s blood. Shinzon kidnaps Picard from the Enterprise, as well as B-4, having planted the android on the nearby planet to lure Picard to the Border. However, Data reveals he has swapped places with B-4, rescues Picard, and returns with Picard to the Enterprise. They have now seen enough of the Scimitar to know that Shinzon plans to use the warship to invade the Federation using its thalaron-radiation generator as a weapon, with the eradication of all life on Earth being his priority.

The Enterprise races back to Federation space but is ambushed by the Scimitar in the Bassen Rift, a region that prevents any subspace communications. Two Romulan Warbirds come to the aid of the Enterprise, not wanting to be complicit in Shinzon’s plans, but Shinzon destroys one and disables the other. Recognizing the need to stop the Scimitar at all costs, Picard orders the Enterprise to ram it. The collision leaves both ships heavily damaged and destroys most of the Scimitar‘s primary weapons. Shinzon orders the Scimitar to back away, then activates the thalaron weapon. Picard boards the Scimitar to face Shinzon alone, and eventually kills him by impaling him on a metal strut. Data jumps the distance between the two ships with a personal transporter to get Picard back to the Enterprise and then sacrifices himself when he fires his phaser at the thalaron generator, destroying the Scimitar. The crew mourn Data, and the surviving Romulan commander offers them her gratitude for saving the Empire.

On the Enterprise, now back at Earth drydock for extensive repairs, Picard bids farewell to the newly promoted Captain Riker, who is leaving to command the USS Titan and begin a possible peace negotiation mission with the Romulans. Picard meets with B-4, and discovers that Data had downloaded the engrams of his neural net into B-4’s positronic matrix before he boarded the Scimitar. Picard leaves B4’s quarters walking down a corridor smiling, knowing that one day, Data will return.