Scifi Diner Rewind 360 – Star Trek: Into Darkness (Where Perhaps They Should Have Left Khan) 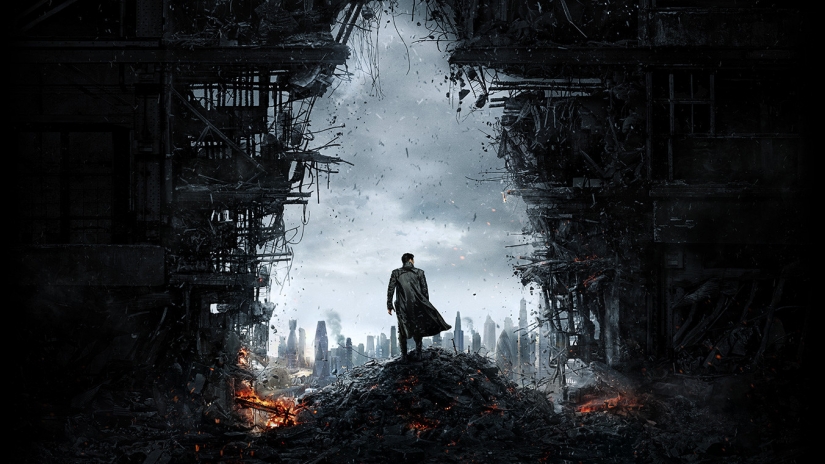 Tonight’s Menu: On this rewind, our discussion of Star Trek: Into Darkness discussed how, if the movie didn’t try to be Khan, it might actually be a great movie. We also discuss its commentary on terrorism, genetic engineering, friendship, the Klingons, and more.

Scifi Diner Rewind 360 – Star Trek: Into Darkness (Where Perhaps They Should Have Left Khan)

In 2259, Captain James T. Kirk is removed from command of the starship USS Enterprise for violating the Prime Directive after exposing the ship to the primitive inhabitants of the planet Nibiru in order to save them, and Spock, from a cataclysmic volcanic eruption. Admiral Christopher Pike is reinstated as commanding officer with Kirk demoted to the rank of Commander and first officer. Commander Spock is transferred to another ship. Shortly after, the Section 31 installation in London is bombed by renegade Starfleet operative John Harrison. Harrison attacks Starfleet Headquarters in a jumpship during an emergency meeting about the situation, killing Pike and other senior officers. Kirk disables the jumpship, but Harrison transports to Kronos, homeworld of the hostile Klingons.

Admiral Alexander Marcus reinstates Kirk and Spock to Enterprise with orders to kill Harrison using a new long range stealth photon torpedo. Chief Engineer Montgomery Scott objects to allowing untested torpedoes on board the ship without knowing their specifications; when he is overruled, he resigns. Kirk assigns Pavel Chekov to replace Scotty. En route to Kronos, Enterprise‘s warp capabilities become disabled. Kirk leads a team with Spock and Uhura onto the planet in a small landing craft, where they are ambushed by Klingon patrols who order them to land. Uhura leaves the landing craft to talk to the Klingons. They decide to kill Uhura, but Harrison suddenly appears and kills all the Klingons. After the battle, Harrison demands that Kirk tell him the number of torpedoes on board the Enterprise, surrendering when Spock tells him.

Dr. Leonard McCoy and Marcus’s daughter, Dr. Carol Marcus, open a torpedo at Harrison’s behest, revealing a man in cryogenic stasis. Upon further investigation, all the other experimental torpedoes are revealed to similarly contain cryogenically frozen humans. Harrison is taken to the ship’s brig, where he reveals his true identity as Khan, a genetically engineered superhuman awoken by Admiral Marcus from centuries of suspended animation to develop advanced weapons. Khan reveals that Marcus sabotaged Enterprise‘s warp drive, intending for the Klingons to destroy the ship after it fired on Kronos, creating an act of war by the Klingon Empire. Khan also gives Kirk a set of coordinates. Kirk contacts Scotty on Earth and asks him to investigate. Scotty discovers the coordinates lead to a covert Starfleet facility near Jupiter.

Enterprise is intercepted by a much larger Starfleet warship, USS Vengeance, commanded by Admiral Marcus. Marcus demands that Kirk deliver Khan, but Enterprise flees to Earth to expose him. After Vengeance disables Enterprise near the Moon, Carol reveals her presence aboard the ship. Marcus forcibly transports Carol to Vengeance before ordering Enterprise‘s destruction. Kirk offers Khan and himself for the lives of his crew, but Marcus rejects Kirk’s offer, revealing he never intended to spare them and orders Vengeance to attack. Vengeance suddenly loses power after being sabotaged by Scotty, who infiltrated the ship. With transporters down, Kirk and Khan, with the latter’s knowledge of the warship’s design, space-jump to Vengeance. Spock contacts his older self, who warns that Khan is ruthless and untrustworthy and that Khan’s older self was only defeated at a terrible cost. After capturing the bridge, Khan overpowers Kirk, Scott and Carol, kills Marcus, and takes control of Vengeance.

Khan demands that Spock return his crew in exchange for the Enterprise officers. Spock complies but surreptitiously removes Khan’s frozen crew from the torpedoes and arms the warheads. Khan beams Kirk, Scott and Carol aboard Enterprise, but betrays their agreement by attacking Enterprise; however, Vengeance is disabled when the torpedoes detonate. With both starships caught in Earth’s gravity, they plummet toward the surface. Kirk enters the radioactive reactor chamber to realign the warp core, sacrificing himself to save the ship.

Khan crashes the Vengeance into downtown San Francisco in an attempt to destroy Starfleet headquarters. Khan escapes the wreckage so Spock transports down in pursuit. McCoy discovers that Khan’s blood has regenerative properties that may save Kirk. Spock pursues Khan through the city and is about to kill him, but Uhura stops him. Khan’s blood revives Kirk. One year later, Kirk speaks at Enterprise‘s re-dedication ceremony. Khan is sealed in his cryogenic pod and stored with his compatriots. The Enterprise crew embarks on a five-year exploratory mission.