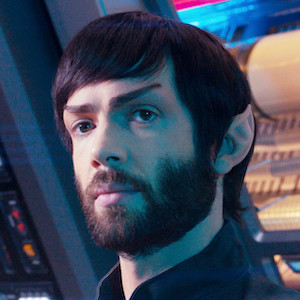 Tonight’s Menu: On this podcast, we share our Shore Leave 41 interview with actor Ethan Peck, who played Spock on Discovery Season 2 and who also just happens to be Gregory Peck’s grandson. Ethan Peck will be appearing at Shore Leave 41, happening on July 12th through the 14th, in Hunt Valley, Maryland.

Peck is the grandson of actor Gregory Peck and the son of Stephen Peck (a former actor, documentary filmmaker, and Vietnam veteran, who is President and CEO of U.S. Veterans Initiative), and abstract artist Francine Matarazzo. He has a half-sister (from his mother’s second marriage), Marisa Matarazzo, who is a novelist and creative writing professor at Otis College of Art and Design in Los Angeles.

After high school, Peck attended the Tisch School of the Arts at New York University, enrolling in the Experimental Theater Wing for three years, before leaving to further his acting career.

Peck had many star television appearances as a young actor, including a younger Michael Kelso (played by Ashton Kutcher) in That ’70s Show. In his first film role at age 9, he co-starred in the film Marshall Law as Jimmy Smits’ son. He appeared in the 1999 movie Passport to Paris starring Mary-Kate Olsen and Ashley Olsen, and was Mary-Kate’s first on-screen kiss.

Peck co-starred with Adam Rothenberg and Mariah Carey in the 2008 film Tennessee, followed by a co-starring role opposite Peter Coyote and Bebe Neuwirth in the film Adopt a Sailor. He won the award for “Best Actor” at the 2009 Sonoma International Film Festival for his portrayal of “Sailor”.

In 2012, Peck played Prince Maxon for the pilot adaptation of the popular book The Selection, but was later replaced by newcomer Michael Malarkey. Neither the first nor second pilot was picked up to go to series.

In 2015, Ethan Peck became an spokesperson for the fashion brand Salvatore Ferragamo and appeared in a number of print editorials representing the Italian brand. He was also featured in Coming Home to Hollywood, a short film about the brand’s 100th anniversary.

In 2016, Peck starred in The Curse of Sleeping Beauty and Tell Me How I Die.

In 2017, Ethan was cast in a comedy, The Honor List, alongside Meghan Rienks, Sasha Pieterse, Arden Cho and Karrueche Tran. The movie was released in 2018.