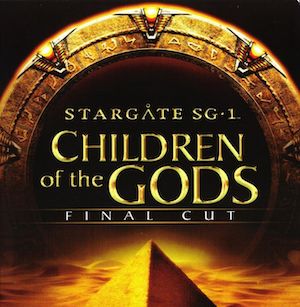 TONIGHT’S MENU: On this podcast, we begin looking at pilots of past TV shows with Stargate: Children of the Gods. We discuss the way this pilot is unique in that it bridges the original movie and the the entire Stargate TV franchise.

Stargate: Children of the Gods

“Children of the Gods (Part 1 & 2)” is the first episode of the military science fiction television series Stargate SG-1. It was written by producers Jonathan Glassner and Brad Wright. The pilot was directed by Mario Azzopardi.

“Children of the Gods” is about the re-establishment of the Stargate program after the events of the original 1994 film. The story follows six characters from the film and three new ones created for the series. The central plot involves Apophis attacking the Stargate Command (SGC) and the surviving soldiers from the attack believing him to be Ra from the film.

One year previously, as depicted in the movie Stargate, Colonel Jack O’Neill led a team through the Stargate to the planet Abydos. After killing the Goa’uld System Lord Ra with a nuclear bomb, O’Neill returned to Earth with two survivors of his team, Charles Kawalsky and Louis Ferretti. They leave behind Dr. Daniel Jackson, with his new love Sha’re (called Sha’uri in the movie) and her brother Skaara.

The series starts in the empty Embarkation Room of the empty Stargate Command which has been left almost completely empty as a result of the Stargate Program being shut down. In the Embarkation Room, four male airmen, two of whom are Airman 1st Class Fryatt and Staff Sergeant McAfee. The four are joined by Senior Airman Carol Weterings and despite the game going, Weterings expresses doubt about being in the room. Seconds later, the Stargate apparently activates on its own, and the Goa’uld System Lord Apophis and several Jaffasoldiers come through to the Stargate Command base at the Cheyenne Mountain Complex. Weterings is rendered unconscious while her four colleagues including Fryatt and McAfee are killed in the ensuing firefight. The attacker then depart through the Stargate after General Hammond and his soldiers secured the room. Soon after this event, O’Neill (Richard Dean Anderson) is re-called to Cheyenne Mountain by Major GeneralGeorge Hammond (Don S. Davis). He is questioned along with his former teammates Charles Kawalsky (Jay Acovone) and Louis Ferretti (Brent Stait), about their mission to Abydos. When they refuse to reveal anything other than what is in their reports, General Hammond chooses to send a nuclear bomb through the Stargate to Abydos, believing that the aliens could only have come from Abydos and hoping to destroy whoever came through.

O’Neill reveals that he had lied about using the bomb to destroy Abydos. He admits that while the alien Ra was killed, the people of Abydos are still alive and Dr. Daniel Jackson (Michael Shanks) is living among them. After talking to his superiors, Hammond allows O’Neill to send a tissue box through the Stargate. The box is returned, proving that Jackson is alive and well, O’Neill is recalled to active duty, regains his rank of coloneland is given permission to take a team through the Stargate to Abydos to investigate the alien invaders. A team is assembled which includes O’Neill, Kawalsky, Ferretti, and Captain/Dr. Samantha Carter (Amanda Tapping), along with several others. When they step through the Stargate, they find a group of Abydonians waiting for them, armed with military weapons from Earth.

Daniel leads O’Neill, Kawalsky, and Carter to a large cavernous room that has innumerable hieroglyphs on the walls. Jackson reveals that he believes that the hieroglyphs of the cartouche match the various symbols on the Stargate, leading him to believe that the walls are actually a map of the coordinates of a vast network of Stargates across the galaxy. While O’Neill and the others are away from the Stargate, the base camp nearby is attacked by the same invaders who attacked the SGC earlier in the episode. The leader’s eyes glow, causing many of the survivors to believe that he is Ra. The invaders take Sha’re (Vaitiare Bandera) and Skaara (Alexis Cruz, from the 1994 film) with them. Determined to save his wife and brother-in-law, Daniel accompanies O’Neill and his team back to Earth. When the injured Ferretti is able to reveal the symbols that the invaders used to leave Abydos, General Hammond is given permission by the President of the United States to form nine teams who will use the Stargate to gather information about threats to Earth. O’Neill is given command of the team designated “SG-1”, with Carter as his second-in-command and Jackson accompanying him. Kawalsky is given command of SG-2.

On another planet, SG-1 encounters a group of monks who escort them to the town of Chulak. They find out that Sha’re has been possessed by a Goa’uld, and the team is taken prisoner.

The team finds Skaara inside the prison. Jackson explains that it was not Ra who attacked them, but Apophis. Before Skaara and SG-1 can escape, Apophis and the possessed Sha’re enter with several guards. Several prisoners are chosen to become hosts to the “children of the Gods”. Skaara is among the chosen and is dragged away, screaming frantically for O’Neill. Apophis orders that the rest of the prisoners be killed. The guards prepare to execute his orders, but O’Neill desperately convinces Teal’c, Apophis’ morally conflicted First Prime, that he can save his people. Teal’c turns on his fellow guards, helping O’Neill and the other prisoners escape.

O’Neill, Carter, Jackson, and Teal’c lead the prisoners away from Chulak toward the Stargate, with guards pursuing them. Teal’c shows O’Neill that he has a Goa’uld inside him, much to the shock of the others. Near the gate, SG-1 is pinned down by a Goa’uld troop carrier that has transformed into a death glider. (This transformation and the troop carrier appear only in the pilot, and were not continued into the series proper; the 2009 DVD version replaces the transformable ship with a trio of ships that match the later series continuity.) They are rescued by SG-2, who destroy the ship with a rocket launcher. At the gate they find Apophis’ troops leaving with the prisoners. O’Neill gains Skaara’s attention, but Skaara is already possessed by a Goa’uld. Skaara uses a hand device to knock down O’Neill and escape through the gate. As a battalion of Jaffa attacks their position, Jackson opens the Stargate and leads the prisoners through it. Before Kawalsky steps through the Stargate, he is invaded by an infant Goa’uld, unknown to the others.

SciFi Diner Podcast 382 – The Picard Finale and Our Interview with John Tilden, President of the Heinlein Society (A Farpoint 2020 Interview)