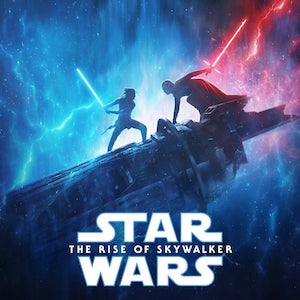 Tonight’s Menu: On this episode of the Diner, we discuss how fantastic Star Wars: The Rise of Skywalker was and we break the movie down, our favorite moments, cameos, trivia, and more.

Star Wars: The Rise of Skywalker (also known as Star Wars: Episode IX – The Rise of Skywalker) is a 2019 American epic space-opera film produced, co-written, and directed by J. J. Abrams. It is the third installment of the Star Wars sequel trilogy (following 2015’s The Force Awakens and 2017’s The Last Jedi) and the ninth and final installment in the “Skywalker saga“. It was produced by Lucasfilm and Abrams’s production company Bad Robot Productions, and was distributed by Walt Disney Studios Motion Pictures. The film’s ensemble cast includes Adam Driver, Daisy Ridley, John Boyega, and Oscar Isaac, as well as Carrie Fisher, who died in 2016 and appears through the use of previously unused footage. The plot follows Rey, Finn, and Poe Dameron as they set out to lead the Resistance‘s final stand against Kylo Ren and the First Order, who themselves are now aided by the return of the deceased former galactic emperor, Palpatine.

After the new trilogy was announced following Disney’s acquisition of Lucasfilm in 2012, it was originally reported that The Last Jedi director Rian Johnson would write the script for Episode IX. In August 2015, Colin Trevorrow was hired to direct the film while constant-collaborator Derek Connolly would co-write a new script (both ultimately retained story credit with Abrams and Chris Terrio). In September 2017, Trevorrow left the project following creative differences with producer Kathleen Kennedy, and a few days later, it was announced that Abrams had been hired to return. Principal photography began in August 2018 at Pinewood Studios in England, and wrapped in February 2019; post-production was completed on November 24, 2019.

The Rise of Skywalker had its world premiere in Los Angeles on December 16, 2019, and was theatrically released in the United States on December 20, 2019. The film received mixed reviews from critics, with praise for the cast performances, special effects, Williams’ musical score and the celebration of the entire saga, but criticism for the pacing and formulaic plot; the perceived departure from the themes and plot of The Last Jedi drew a polarized response.