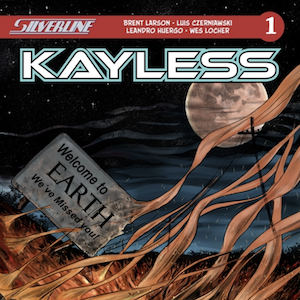 Brent’s father was career U.S. Army, and moved the family around every few years. Thus, as he tells his friends, he is from everywhere… and nowhere (“Nowhere” ended up being a small town in southern Arizona). The first comic he ever bought was G.I. Joe #12, which was coincidentally the first chapter in a major story arc that ran for months. After that, there was no escape.

He started his writing career in the seventh grade with a short, Encyclopedia Brown-type mystery. People liked it, or were at least polite. It was eventually read by a teacher to a captive audience (a school assembly, where all are captive).

He graduated from Northern Arizona University with a communication degree, which he finds useful because he does that a lot. He worked with students for several years before finally finding a love for short film and, incredibly, an ability to support himself writing for it. He has written and produced dozens of shorts that have reportedly been seen as far away as Tibet, which caused him the sort of shock that was rather culturally inappropriate. And, during this time, he kept reading comics.

In the past few years he’s written books, pamphlets, curricula, corporate communication, and a web series. You can see some of his work at vimeo.com/brokenphonebooth. Kayless is the first comic he’s created and written. He wants the U.S. Government (or Elon Musk) to hurry up and perfect time travel technology so he can tell his teenage self, “Don’t believe what they say… read more comics!”

Brent lives and works in Orlando, Florida, with a wife he adores, two dogs he loves, a cat he is just fine with, and an assortment of superhero tchotchke, which, as his wife has pointed out, is the only thing he knows how to buy.

You can buy Kayless here. To find out more about Silverline comics, visit here.