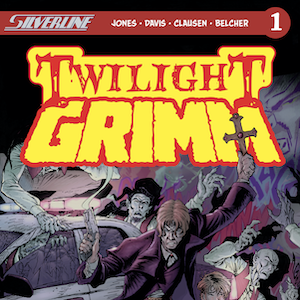 Born and raised in Tulsa, Oklahoma, where he still resides, R.A. Jones has been a professional writer and editor for more than 35 years.
He first came to the attention of the comics field through the bi-weekly review column he wrote for the popular comic book fan magazine Amazing Heroes. For his work there, he was voted “Favorite Writer About Comics” by the readers of Comics Buyer’s Guide magazine.

Moving into actual comics work, he was hired as Executive Editor for a short-lived but fondly remembered independent publisher called Elite Comics, working on such titles as Seadragon and Epsilon Wave.

When Malibu Comics started their line, one of the earliest titles they published was Dark Wolf, written by R.A. and drawn by Butch Burcham. A prolific writer, R.A. went on to produce many titles for Malibu and contribute to several others. Among them was Scimidar; Fist of God; Merlin; Sinbad; White Devil; The Protectors; Ferret; Nightman; Prototype and Star Trek: Deep Space Nine.

Over the course of a long career that included stints as a newspaper columnist, R.A.’s work appeared for a range of other comic book publishers, including Marvel (Wolverine/Captain America; Weapon X: The Draft); DC Comics (Showcase ’95); Dark Horse (Harlan Ellison’s Dream Corridor) and Image (Bulletproof Monk).

The latter series served as the inspiration for the motion picture of the same title. Two short comics stories written by R.A. (“Cold, Hard Facts” and “Three on a Match”) were also adapted to film as episodes of the French television series Metal Hurlant Chronicles.
In recent years, R.A. has focused primarily on prose fiction. Among the works he has written or co-written are three volumes of “The Steel Ring Saga.” These novels — entitled The Steel Ring; Twilight War and The House of Souls — feature the same Golden Age superheroes R.A. used in his Protectors comic book series, but reimagined and placed back in their original time period amidst the chaos of World War II.

Happily returning to his comic book roots, R.A. is now writing the vampire series Twilight Grimm for Silverline and his longtime buddy and former Malibu editor Roland Mann. Reuniting as collaborator with R.A. on the book is another old and good friend: artist Rob Davis, who not only illustrated many of the issues of Scimidar but also worked with him on such titles as Merlin and Straw Men.

When asked how it felt to be thus back in harness, there was only one thing R.A. could say:
“Make Mine Silverline!”