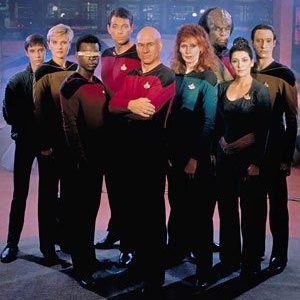 Star Trek: The Next Generation Pilot – Encounter at Farpoint

In 2364, the new flagship of the United Federation of Planets, Starfleet‘s USS Enterprise, travels to the planet Deneb IV for its maiden voyage. Enterprise is to open relations with the simple Bandi people who have somehow been able to tap immense energy reserves and construct Farpoint Station, much to the surprise of the Federation. En route, the Enterprise is met by an omnipotent being who identifies himself as Q, a member of the Q Continuum and declares that humanity is being put on trial—posing in appearance as a Grand Inquisitor—and deciding that their actions in their upcoming mission will be used to judge their worthiness and determine their fate as a race. Before letting the ship resume its course, Q warns Captain Picard (Patrick Stewart) that he is destined to fail.

As the Enterprise arrives, the crew members explore the offerings of Farpoint Station and establish relations with their Bandi host, Groppler Zorn (Michael Bell). The crew becomes suspicious when items they desire seem to appear out of nowhere moments later, and are unable to identify the power source that feeds the station. Deanna Troi (Marina Sirtis), an empath, senses a being with powerful yet despairing emotions nearby, and the crew discover a strange labyrinth beneath the station, but Zorn does not offer an explanation. As the Enterprise crew continues its explorations, a large unknown alien craft enters orbit and begins to fire upon an older Bandi settlement near Farpoint Station, and abducts Zorn. Before Picard orders the ship’s phasers to be fired at the craft, Q appears to remind him of humanity’s trial and prompts Picard to send an away team to the alien craft. The away team discovers the craft has passages similar to those under Farpoint and they are able to free Zorn. Their actions cause the alien craft to transform into a jellyfish-like space creature, and Picard is able to deduce the mystery of Farpoint Station. He confirms with the apologetic Zorn that the Bandi found a similar lifeform injured on their planet and, while attempting to care for it, they also exploited its ability to synthesize matter to create Farpoint Station. The creature now in orbit is trying to help free its mate by attacking those who hold it captive.

Though Q goads Picard into punishing the Bandi, Picard refuses, instead ordering the Enterprise to fire a vivifying energy beam onto Farpoint after the station is evacuated. The beam allows the land-bound creature to transform back into its jellyfish-like form, and it flies into orbit to join its fellow being. As the crew watches the reunion of the alien creatures, Q reluctantly tells Picard that they have succeeded in their test, but hints that they will meet again.

Author, interviewer, host, archivist, producer, voiceover, actor… and fan: LARRY NEMECEK has a background in news and theatre, but it is “Trekland” where he’s worked for over 25 years. A renowned Star Trek authority, Larry is the author of the bestselling classic Star Trek The Next Generation Companion, and a regular convention guest worldwide, often referred to as “Dr. Trek.”

ON STAGE / ON CAMERA

Larry is a regular host and guest at conventions around the world, and a favorite on podcasts, too. Every Tuesday you can hear him and a guest on his own Roddenberry Podcast Network show The Trek Files, and then watch at 1 pm Pacific for Trekland Tuesdays LIVE on Facebook. There’s also official DVD/Blu-ray features, documentaries, and TV and radio whenever Trek news breaks. Thousands of fans also know him as the original Dr. McCoy in the award-winning Internet hit Star Trek Continues.

A trained journalist, Larry went from daily news to best-selling author of the classic Star Trek: The Next Generation Companion, and now the Star Trek: Stellar Cartography map/book set. He served as managing editor of the fan-favorite official magazine Star Trek Communicator, was a senior staffer for the entire original Fact Files run, and was an editor/producer for the original startrek.com. His regular column for Star Trek Magazine celebrated both its 100th entry and 20th anniversary in November 2017.

Larry continues to produce video interviews with Trek creative pros and fans for his “Switching to Visual” online series. Many Trek vets turn up as guests for Portal 47 as well. His “On Speaker” audio series draws from hundreds of hours of long-form archival interviews since the late ‘80, curated and digitally remastered onto CD. As a photographer, Larry has also captured decades of original images of Star Trek moments both pro and fan, a close witness especially during the TV revival boom of the later Next Generation era through Enterprise.

The Con of Wrath is Larry’s first film project, a documentary preserving the tale of “Star Trek’s most glorious failure”: the 1982 Ultimate Fantasy arena show debacle. His consulting credits include the storied Star Trek: The Experience in Las Vegas and other Star Trek exhibitions and science tours. He was creative consultant for Webbie Award-winning Star Trek Continues series online, and speaks for the non-profit Enterprise in Space global education/orbiter program.