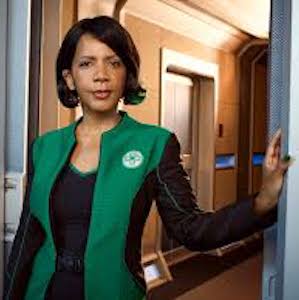 Jerald began her career with small guest roles, appearing in The Paper Chase from 1984 to 1986, General Hospital in 1986, and Do the Right Thing in 1989 before playing the title character’s unflappable personal assistant, Beverly Barnes, on The Larry Sanders Show. Throughout the 1990s, Jerald guest starred in several television series, including Parker Lewis Can’t Lose, Star Trek: The Next Generation, Grace Under Fire, Cosby and Family Law.

Following Larry Sanders, Jerald appeared in the 1997 film Absolute Power and Star Trek: Deep Space Nine playing freighter captain Kasidy Yates, the love interest for the series’ main character Benjamin Sisko, a recurring role which she played from 1995 to the show’s end in 1999. She also had a recurring guest role on ER as Lynette Evans from 1998 to 1999. She then appeared as Roscoe Dellums in the Emmy Award-winning TV movie The Color of Friendship. Jerald also guest starred on Frasier, The Practice, Touched by an Angel and The X-Files.

Jerald’s arguably most-recognized role came in 2001 when she appeared in the pilot episode of the Kiefer Sutherland-led Fox series, 24, playing Sherry Palmer, the wife of Senator David Palmer. She appeared in all but two of the first season episodes and multiple episodes of the second and third seasons.

Jerald also guest-starred on the sitcom Eve, playing Shelly’s mother Beverly in four episodes. She guest-starred in three episodes of sci-fi series The 4400 in 2007. Penny had a recurring role on ABC midseason drama October Road for the 2007–08 season.

Jerald also teaches acting workshops and produces and directs for Outreach Christian Theater Company, which she and her musician husband Gralin Jerald founded in 1994.

She also had guest appearances on episodes of Tyler Perry’s House of Payne.

Jerald joined the cast of ABC‘s Castle in its fourth season as the new captain of the 12th Precinct, Victoria “Iron” Gates, replacing Ruben Santiago-Hudson‘s deceased character Roy Montgomery as captain of the precinct.