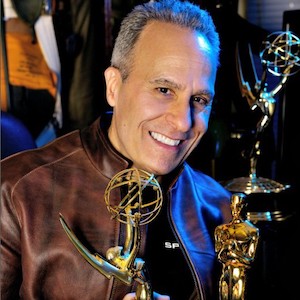 Doug Drexler (born in New York City) is a visual effects artist, designer, sculptor, illustrator, and a makeup artist who has collaborated with such talents as Al Pacino, Dustin Hoffman, James Caan, Meryl Streep, and Warren Beatty. He began his career in the entertainment industry working for makeup artist Dick Smith on such films as The Hunger and Starman. He has also contributed to Three Men and a Little Lady, The Cotton Club, FX, Manhunter and Dick Tracy. Dick Tracy earned Drexler an Oscar, as well as The British Academy Award and the Saturn Award for his special makeup effects on characters such as Big Boy Caprice (played by Pacino) and Mumbles (played by Hoffman). Two Emmy nominations in the same field followed for three years working on Star Trek: The Next Generation, where he performed such tasks as aging Captain Picard for “The Inner Light”. His final make-up job for the series was the Mark Twain makeup worn by Jerry Hardin in the two part episode “Times Arrow”.

In 1992 Drexler moved over to Star Trek: Deep Space Nine as designer, digital artist and effects artist. He continued in that capacity on the subsequent Star Trek films as well as Star Trek: Voyager. In April 2001 Drexler worked as senior Illustrator and CGI designer on the fifth Star Trek series, Enterprise. Following Enterprise, he was hired by Visual Effects Supervisor Gary Hutzel as CG Supervisor on Battlestar Galactica, “Caprica”, “Blood and Chrome”, and “Defiance”. Doug won two Emmy Awards and a Visual Effects Society Award for Galactica.

Doug grew up on Long Island and attended Newfield High School.
As of 2015, he is also a member of the board of directors for the Hollywood Science Fiction Museum.