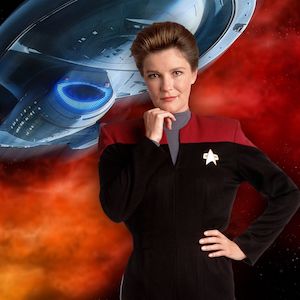 Star Trek: Voyager is an American science fiction television series created by Rick Berman, Michael Piller, and Jeri Taylor. It originally aired from January 1995 to May 2001 on UPN, lasting for 172 episodes over seven seasons. The fifth series in the Star Trek franchise, it served as the fourth sequel to Star Trek: The Original Series. Set in the 24th century, when Earth is part of a United Federation of Planets, it follows the adventures of the Starfleet vessel USS Voyager as it attempts to return home after being stranded in the Delta Quadrant on the far side of the Milky Way galaxy.

Paramount Pictures commissioned the series following the termination of Star Trek: The Next Generation to accompany the ongoing Star Trek: Deep Space Nine. They wanted it to help launch UPN, their newly established network. Berman, Piller, and Taylor devised the series to chronologically overlap with Deep Space Nine and to maintain thematic continuity with elements that had been introduced in The Next Generation and Deep Space Nine. The complex relationship between Starfleet and ex-Federation colonists known as the Maquis was one such element and a persistent central theme. Voyager was the first Star Trek series to feature a female captain, Kathryn Janeway (Kate Mulgrew), as the lead character. Berman served as head executive producer in charge of the overall production, assisted by a series of executive producers: Piller, Taylor, Brannon Braga, and Kenneth Biller.

Set in a different part of the galaxy from preceding Star Trek shows, Voyager gave the series’ writers space to introduce new alien species as recurring characters, namely the Kazon, Vidiians, Hirogen, and Species 8472. During the later seasons, the Borg—a species created for The Next Generation—were introduced as the main antagonists. During Voyager’s run, various episode novelizations and tie-in video games were produced; after it ended, various novels continued the series narrative.

Keith R.A. DeCandido was born and raised in New York City to a family of librarians, which pretty much explains everything. He has written more than 50 novels, as well as short stories, nonfiction, eBooks, comic books, and blog entries, many of them in various media universes, among them Star Trek, Alien, Supernatural, World of Warcraft, StarCraft, Marvel Comics, Cars, Farscape, Buffy the Vampire Slayer, Stargate, Serenity, Resident Evil, Kung Fu Panda, Doctor Who, Sleepy Hollow, Leverage, Orphan Black, and more. Among his many works of original fiction are the fantasy police procedural series of novels and short stories that started with Dragon Precinct, as well as a series of urban fantasy short stories set in Key West, Florida, many of which are in Ragnarok & Roll: Tales of Cassie Zukav, Weirdness Magnet, fiction about cops in a city filled with super heroes, and an urban fantasy series about a nice Jewish boy from the Bronx who hunts monsters, starting with the novel A Furnace Sealed. Keith is also an editor (having supervised several book lines and put together dozens of anthologies), musician (percussionist for the Don’t Quit Your Day Job Players, the Boogie Knights, and others), pop culture commentator (he writes for both Tor.com and his own Patreon at patreon.com/krad) and a third-degree black belt in Kenshikai karate (he both trains and teaches). He still lives in New York City with various humans and animals.