Science, Creativity, Imagination, Wimsey – add orange soda and a hot pocket and what do you get? All the scifi!

M Sieiro Garcia – Absolutely tickled to be a part of the SciFi Diner Podcast crew, M’s an average gal who gets the chance to chat about one of her favorite subjects with a couple of smart and fun guys. Growing up in Nation’s Capital, many family trips to the Smithsonian had her dreaming of the stars. (Who doesn’t love the Air & Space Museum?) Star Wars opened the geek door to Star Trek, Aliens, Robert Asprin books, etc. Her geek interests vary wildly and she’s always up for learning or reading something new (except for Twilight, just don’t get her started, ok? ok. Because, seriously, sparkly randy vampires? yeeeesh. We told you not to get her started.)When she’s not tending to her big-girl job (the one that pays the mortgage), she’s working on her self employment dream job: voice actor/over diva. She’s had the pleasure to work with a bunch of a great people on this mission to cartoon/audio drama immortality. Be sure to check out her other projects!

These are not the droids your looking for.

Scott Hertzog – A teacher and lover of all things science fiction (well, most things anyway), he remembers three defining moments in his scifi career.  When he was six, he remembers watching Jules Verne’s Mysterious Island on a little black and white TV and the big bees scaring the crap out of him.  Later, he had a librarian at his middle school hand him a copy of Andre Norton’s Galactic Derelict and it radically changed his life.  From then on he consumed all the science fiction he could get his hands on.   And the third thing was, well, meeting Miles and starting this podcast of course.  He is an avid Star Wars fan of both the films and the extended universe and also is infatuated with J.R.R. Tolkien.  Being a family man, he watches and reads as much science fiction as that can allow. 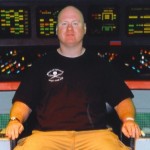 To baldly go where no man has gone before.

Miles McLoughlin – A a lover of all things Star Trek and other scifi, his earliest memories are of watching the original Star Trek on a black and white TV with his father back in the early seventies. Miles remembers playing with Star Trek toys and action figures back in the day. Fast forward a few years later; Star Wars became Miles’ new love. Star Wars now known as Star Wars IV: A New Hope was the first movie he saw at a drive-in theater with his family. Three Star Wars movies and all the toys kept Miles going for quite some time. On the small screen, the classic Battlestar Galactica and Buck Rogers were playing on TV, which also helped him survive the late seventies & early eighties and nurtured Miles’ addiction for sci-fi and entertainment. Throughout the 80’s and later, Star Trek came back to the big screen and the small screen which wooed Miles heart to Star Trek again. Miles’ Star Trek fix is satisfied by the Kelvin timeline movies, hundreds of Trek novels and the new show Star Trek Discovery.

For almost ten years Miles with his friends Scott Herzog and M. Sierro Garcia have been podcasting their love of all things sci-fi on the Sci-Fi Diner Pod Cast, informing their listeners on the latest sci-fi news and keeping the conversation going with them as they continue to celebrate this thing we call Science Fiction.

Many thanks go out to others that have made this show possible and have contributed to this website.  We especially wish to thank Startled Rhino, for reworking the website, Woollymittens for testing website compatibility, and for Chris Ruch for his logo design.  You guys all help make us what we are. Intro music for the show is creative commons from the YouTube Creative Commons Library is Manchester Dream.